We arrived in Bangkok in May towards the end of the dry, hot season and just in time for the monsoons. It is a popular misconception amongst farang (foreigners) that the monsoon season brings months of relentless rain. In reality, we were headed into five months of complete unpredictability. One day would be cloud-free, though with hair-curlingly high humidity, and the next we would be wading through the garden with all manner of creatures that had risen with the waters of the nearby klong (canal).

We called the canal Sweetwater Creek. It was anything but. In fact, it was a sluggish slew of water with additives of various kinds, from human waste to kitchen scraps. When the rains came, our little pond in the garden would overflow, along with the rather spectacular goldfish I had foolishly been talked into buying. They happily mingled with the lesser varieties from the klong as well as all manner of reptiles and rodents that would swirl around the garden in varying stages of panic. It didn’t take me long to stop worrying about aerating the water for the fish. It did take a bit longer for me to stop replacing them, possibly due the lispy entreaties of my toddler daughter, Kate.

However, the end of all this climatic uncertainty and floundering fish in gardens is celebrated by one of the prettiest and gentlest sights I’ve ever seen.

Loi Krathong. It seemed that a young Thai girl’s education was not complete without mastering the painstakingly fiddly task of creating the most beautiful loi krathong (floating raft) she could. Traditionally, the rafts - in shapes of a lotus in full bloom, a swan, Mount Meru from Buddhist mythology, or chedis (pagodas) - were tightly woven from banana leaves. They were then decorated with any combination of blossoms, candles, coins, betel nuts and joss sticks. Occasionally, tufts of hair or nail clippings of the human variety were added in a symbolic gesture of releasing one’s character flaws. The loi krathongs would then be set adrift from the banks of the klongs and rivers, the seashore or any waterway, with candles flickering. Ill fortune would float away and the river goddess, Mae Phra Khongha, would be appeased.

In the 80’s and 90’s spirit of ‘quick and easy’, polystyrene discs were seen piled fifty high beside each street vendor to be used as the base for these rafts. In the enlightened days of the 21st century, the festival is seeing a return of the traditional form made from the banana leaf. Leaves from the rubber tree, as well as discs of bread - which help feed the fish as they disintegrate - are also encouraged by the Thai government as being friendlier to the environment.

Like many ancient festivals around the world, this too has varied origins. Folklore tells of respect being paid to the sacred footprint left by Lord Buddha on the banks of the mythicalRiver Nammadhammahantee, or the same respect being offered to Phra Uppakhut, one of Buddha’s greatest disciples. Others believe that Nopphamat, a beautiful courtesan of the Sukhothai Court sometime between 1238 and 1438, made the first loi krathong for her king in celebration of Mae Phra Khongha. Yet another possibility is that the origins lie in Brahmin mythology. Thanks were given, and apologies made, to Ganga, the deity of the River Ganges, for using and polluting the waters.

Whatever their origins, the appearance of the loi krathongs being made and sold in the street stalls was very welcome. The festival of Loi Krathong is always held at the full moon of the twelfth lunar month in the Thai calendar, and thus falls sometime in mid-November. It is at the end of the monsoon season when the waters are high and the crops cannot be harvested until the waters recede; what better way to pass the time than to give thanks for blessings received? 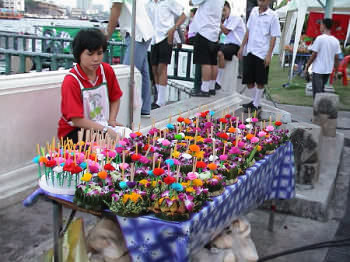 Photo provided by www.DownTheRoad.org, the Ongoing Global Bicycle Touring AdventureEs, the woman who kept the house clean and kept me on track as far as Thai protocol was concerned, introduced us to the art of loi krathongconstruction.

Initially I had rather baulked, thinking I would be intruding on a Thai custom that was not mine to share. In the true Thai spirit of generosity and in the politest way possible I was told 'not to be a fool kha’. (Kha, or krap being the male equivalent, was one of those particularly useful words that some languages have which don’t really mean anything but makes a sentence sound less abrupt.)

All the necessary paraphernalia for the lesson was laid out on the patio floor in strict order of need: banana leaves, orchids, coins and candles. Es was a master. I was not a proficient student, and Kate much preferred to toddle around wearing flowers in her hair. Trying to coerce unyielding banana leaves into any sort of tight and recognizable shape, let alone a lotus bloom, was not a quick art to learn and my unskilled fingers ended up lacerated.

It was all worth it though.

We held our own little Loi Krathong ceremony in the pond at sundown. All the lights in the house were turned out and we had just the glow from the soi (lane) lights casting soft, gentle shadows around the garden. Es showed us the way: even Kate’s excited chatter stilled as Es knelt beside the water and made a wai (bowed) to her beautifully woven and decoratedloi krathong. She said her prayers and then gently slid the raft into the pond and we watched, mesmerized, as it floated around pushed by the flow from the pump still trying manfully to aerate the water.

Mine was next. It did not float but sank, within about five seconds to the depths, albeit shallow ones, startling the fish into a frenzy of activity. It was an ignominious end to my rather pathetic attempt at crafting a loi krathong.

Kate had been very patient. It was now her turn to float her lovely loi krathong, courtesy of Es’s handiwork and furnished with a little doll “for to be lucky, Mummy”. She resisted all attempts to hold her on the edge of the pond and knelt down beside Es and made a wai, as Es had taught her very soon after she came to work for us. Since she had just learned her night-time prayer 'gentle Jesus, meek and mild’, she insisted that we recite it together. It was one of those quiet moments when all the world seems to be in harmony.

Kate's loi krathong did not slide gracefully into the pond but rather sploshed in, sending droplets of water over her nightie, but in true Thai fashion she said “mai pen lai Mummy”. It doesn’t matter. And it didn’t.

Kate went to bed, a tired but happy little girl.

I went out to play. The roads were thronged with people, young, old and everything in-between, each carrying their loi krathong, all heading to the klongs and river on foot, in cars, in tuk-tuks and by bus to give thanks and ask forgiveness. After snaking my way up, down and around the sois, I finally joined friends on the balcony of one of the hotels along the banks of the Chao Phya and reveled in the clear, Thai winter air. The slight breeze harried the midges and mosquitoes and we had a bite-free evening. The night sky gleamed under the full moon and we watched as thousands upon thousands of loi krathongs were reverently slid into the water and then meandered gently down the river, carrying misfortunes away and honoring the Mother of the Waters, Mae Phra Khongkha.

Some were huge and ornately decorated and lit with battery-operated candles. They were not so charming, thrusting as they did the smaller, prettier rafts out of the way and swamping them with their velocity with no thought to manners. I couldn’t help feeling the sins being washed away in those monsters must’ve been very great indeed.

Other loi krathongs had been launched, linked together, by new couples hoping for a sign of the veracity of their love and the durability of their relationship. I wondered how many hopes were also swept away.

In Tak province, rather than risk fate, the rafts are made of coconut shells and are threaded together. Marriage insurance, Tak-style.

Whatever the reason and whatever the size, it was still magical to watch those loi krathongsglittering down and around the waterways, getting caught in the water hyacinth then edging onwards on their journeys of redemption. With such a tranquil sight, it was almost possible to believe that all one’s misfortunes and misdemeanors could be expunged in a twinkle, and a new beginning would start with the new day.

When I made my way home, the streets were still full, this time with tired, empty-handed crowds, and as I crossed the canal, I thought that even Sweetwater Creek had become a place of enchantment. Before I went to bed I had a quiet glass of wine beside our pond, watching Es and Kate's loi krathongs lazily circulating. Mine was still on the bottom. I wondered, did that mean I had no sins to atone for? But the reality was that my raft-making skills just needed serious work.

My first Loi Krathong festival had been lovely, so mai pen lai.

Anglo-Australian writer Apple Gidley has been an expatriate most of her life. As a child, employee, volunteer, wife and mother, she has faced diverse roles and challenges in countries ranging from Papua New Guinea to Scotland. She firmly believes that with cultural awareness and understanding, a capacity to embrace change, a small dose of cynicism and large amounts of patience and humor, every new assignment can be a rich and rewarding experience for the entire family.