“Asalaam malecum,” I said, greeting the man wearing a lab coat as I took off my plastic sandals and entered the building. I had only been in the West African country of Senegal for a few months, but already my cultural eyes were adjusting. I could see that this small, cement block structure, with no water or electricity, was a symbol of progress for the Lébou village of Sindou. Unlike its neighbors, the town now had a medical clinic. 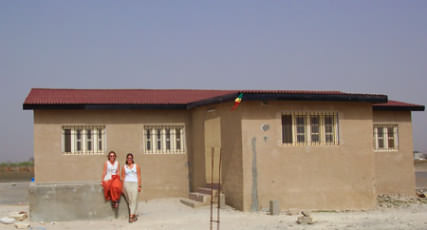 When malaria made its annual trek through the country, the villagers would have a place to go for medicine. When their children fell on the jagged ocean rocks, they could be stitched up. They had someone they could trust, one of their own who had come home to help them. They also had me, an American fresh out of college who stumbled through their language and didn’t know the first thing about treating malaria. But somehow the man understood my greeting, and good intentions. Daouda Mbengue reached out to shake my hand. “Malecum salaam,” he said heartily.

Daouda introduced me to the clinic staff, which included Aida the nurse, Pape the pharmacist and Mbaye Siny the handicapped receptionist. Mbaye’s painfully twisted leg was the result of a poorly aimed immunization needle that had damaged his sciatic nerve as an infant, a fact that remained present in my mind when Daouda taught me to give injections and run an I.V. The job request I came to fill said I would be trained on-site and hands-on. I prayed that my first patients would not be children, the ones with big, fat tears on their pudgy cheeks, screaming to their mothers that they were scared of the white girl. In fact, the experience could not have been any farther from what I’d imagined.

Daouda and I walked across the brown sand, between the dry baobob trees, to the Puular village of Pintiure. In the hierarchy of Senegalese ethnic groups, the Puular herders fall just below the Lébou. Sitting high at the top are the Wolof, the group credited with selling their neighbors to slave traders destined for the early Americas.

A Puular woman was rumored to be very sick, but her family did not have the means to bring her to Sindou. We found her in a straw hut, lying on a thin foam mat, surrounded by her sisters who were chanting and praying to Allah. Her name was Fatou. She was severely dehydrated and non-responsive. To me, the situation appeared hopeless. But Daouda saw things differently. He began to string an I.V. up to the thatch roof, sent a young girl to boil water for a rehydration solution, and began to massage Fatou’s hands and feet. As I helped him prepare the I.V. solution he said, in what I hoped was a joking tone, “Tomorrow you will do this by yourself. I’ll just watch.”

True to his word, the next day Daouda watched me prepare, then administer, Fatou’s intravenous cocktail - a complicated five-hour process that became even more difficult when I applied hand lotion without considering its effects. Daouda only thought he had his plate full with me before - now my slippery hands were incapable of doing anything!

But my prayers had been answered. The first veins I worked on belonged not to an infant, but to an adult who could not respond with tears or cries. Ironically, now I prayed that she would. As we drank rounds of strong mint tea and waited, Daouda asked if I could come back tomorrow and do the same thing alone. Even though we had been joking all day - as when I asked what to do with the used needles and he told me to eat them to be sure the kids didn’t play with them - I decided not to respond sarcastically just in case he was serious. He was.

Daouda worked a night shift at a hospital in town to supplement his $50 monthly salary from the clinic, the most the village could afford to pay him. The next day, after working in the clinic in the morning, he would come by Pintiure to check on us on his way to the hospital for the night shift, then make it back to Sindou in time to work the next morning. 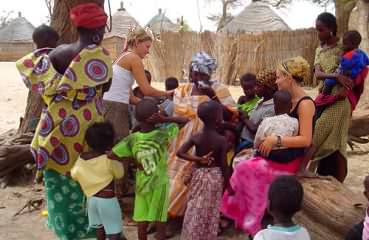 As I sat on the dirt floor, my western mind began thinking of ways to help Daouda. Maybe a pharmaceutical company would support him by supplementing his income. I could write letters asking churches or schools to send donations. But in my heart I knew that these would only be temporary fixes and that once I left, Daouda would be in the same position again. My American eyes were opened to see that money is not always the answer.

By the time we left Pintiure, long after the sun had painted the sky pink, Fatou had opened her eyes a few times, coughed once, and moved her right arm. Her oldest sister tried to pay Daouda 2000 cfa ($4), which would cover about a third of the cost of the treatments, but he refused and insisted that the money should stay in Pintiure where many were malnourished. I was amazed and humbled by his selflessness, but it was not the first or the last time.

Only my village chief is more respected than 40-year old Daouda. The people of Sindou know that Daouda speaks three languages and completed his medical degree in the capital city of Dakar. They know he has two wives and several sons, a symbol of status in his Muslim community. But these are not the reasons for which they respect him.

After earning his degree, Daouda was offered a prestigious job with the Senegalese military working in the children’s hospital of a large city and specializing in tuberculosis. It was a very different world than he knew growing up in Sindou, where his father and grandfathers had pulled their lives from the ocean. As commercial fishing boats had slowly emptied the waters, the only way for a Lébou man to make a good living was to leave the villages for the cities, just as Daouda had. Then one day he received news that his village had built a clinic, but the shortage of medical workers meant that there was no one to run it. For the people of Sindou, what distinguishes Daouda is the fact that he came home.

One afternoon, after the winds from the Sahel Desert had calmed, a sister from my Senegalese host family brought her two-year old daughter, Awa, to my house. I quickly recognized the symptoms of malaria, as Daouda had taught me, so we took her to the clinic. It hadn’t occurred to me that the clinic would be closed since it was Friday afternoon and the men would be praying at the mosque. Walking home empty handed, we ran into Daouda coming back from a shift at the hospital. Even after working all day and night, he opened the clinic for this little girl.

I followed Daouda into the pharmacy room when he went to get her medications. I told him that I wanted to pay for Awa’s treatment. He looked at me strangely, so I said again, hoping my accent would be better this time, “I want to pay for it.” He smiled, and then mimicked my voice exactly and said, “But I want the clinic to pay for it.” The reason Daouda gave for not letting me pay was simple. Even though he knew I could easily afford it, Awa was part of my Senegalese family. In their relationship-based culture, family holds the highest place, far above money. Since other clinic workers did not have to pay for their family’s care, he did not want me to either. The total cost of Awa’s treatment came to $12, the equivalent of a full week’s wages. I couldn’t even find the words to respond to his kindness.

I left Senegal a few months later with stuffed suitcases, a filled heart, and a deep respect for Daouda Mbengue, the man who humbly taught me the important things in life.

Kari Masson has a very colorful collection of stamps in her passport. She grew up in Cote d'Ivoire, studied in the UK, camped in the Swedish tundra, spent time with the Maasai people of Kenya, worked in a health clinic in Senegal, and currently lives in Lyon, France with her husband. Drawing on her experiences, she writes for travel, cross-cultural, and expatriate-focused publications. Check out her website here:www.jkmassonprint.blogspot.com .