In the summer of 2004, my family moved to Accra, Ghana. I was seven years old then. This was the first time in my life I was going to live in Africa. On the one hand, I did not want to say goodbye to my friends in Poland where my family and I had been living - my Dad works for the U.S. State Department and Krakow was our first post. On the other hand, I was curious: what would Africa feel like? My image of Africa was a big sand dune with elephants, giraffes and zebras, covered with plantain trees and coconut palms. 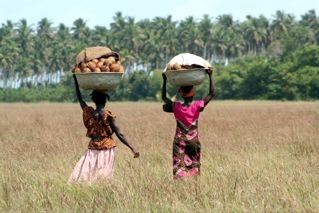 Well, this was one of the times when I was wrong. Accra is a busy town with dusty winds from the Sahara during the harmattan season. Over the two years I spent here, a great number of exciting things happened. In Mole National Park, I saw elephants roaming free and naughty baboons stealing crackers and bananas. I learned to boogie board and enjoyed many days on sandy beaches finding sea shells and sand dollars. If I was thirsty, I’d ask my Mom for a drink and, as unreal as it seems, she would say: “OK dear, why don’t you find a man with a machete to climb up a tree and get a coconut for you?” Fresh coconut juice was my favorite drink in Ghana. One time I met a great Ashanti chief and danced at the festival in his village. I also had a great experience attending Lincoln Community School, an international school uniting many cultures. 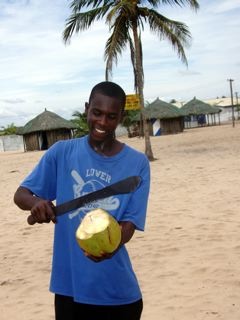 Normal days there were spent getting up at six-thirty, and then waiting for the bus to come between seven and seven thirty. The bus would come at different times because of security concerns. I didn’t like it, because you never knew if you’d be charging for the bus, or sleeping on it going home. Then we would go to school, eat snack at nine, and eat lunch at twelve. We would come home on the bus (you were definitely not lucky if you were last to be dropped off!) and either have a play date, go to the American commissary (where they had food from America), go to a restaurant or just stay at home. Sometimes my parents would go out. We had a Polish nanny who had agreed to come live with us in Ghana.

On Saturdays and Sundays, my dad would pack us all in the car and we would be on our way to a beach. I would relax in the warm sand and then let the water carry me towards the waves on my boogie-board. However, there is something you need to watch out for on a Ghanaian beach. It is the outdoor, behind-a-rock-or-straight-on-the-warm-sand OUTHOUSE! It can really stink up the place.

Once I met some village kids on the beach. I thought they wanted to play, and they did for a while, although they could hardly speak English and we had to find other ways to communicate. However, when my Mom called me for lunch and I was walking away, they begged me for money and food. I did not know what to do so I just ignored them, but it pretty much ruined my day. But then I started thinking… Before I came to Ghana, I always thought everyone had the same amount of money. I soon came to learn that the world did not quite work in that way. This made my feelings mix and my stomach churn. I did not know quite what I was feeling. It was a mix of melancholy and fury. My mind was racing and for the first time in my life I realized that people were different not only by looks but by how much they had. Suddenly I thought the concept of money was not such a great idea after all. This feeling stayed with me for the rest of our tour in Ghana.

One of my most exciting memories of living in Accra was participating in “Alice in Cumberland,” a British pantomime by the Accra International Players. A British pantomime is a funny play based on a fairy tale. This one was based on “Alice in Wonderland” (Cumberland was a make-believe substitute for Wonderland) and directed by my Dad. As a Director, my father had to oversee many people. The cast had eighteen children and fifteen adults. In addition there was a producer, a stage manager, a make-up designer, a set designer, a music designer, a costume designer, a prop manager and many other helpers. The music was especially wonderful. There were many popular songs in the show but in most of them we changed the words to make them funnier and more appropriate for the play. We also made some of them shorter.

My favorite song (sung to the tune of “The Red Flag”) was:

We pigs are striving to be free! 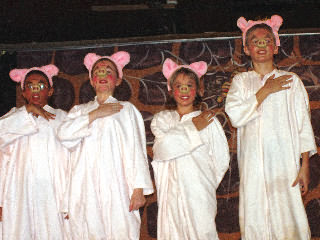 To live by man with equality!
No more pork chops!
No more stew!
No sweet and sour or vindaloo!
Our courage strong,
Our words are true!
If you pork us, then we’ll
pork you!

All actors had at least one song to participate in. During the first week of rehearsals we all brought home enormous scripts which had to be memorized. The rehearsals lasted for a total of ten weeks. 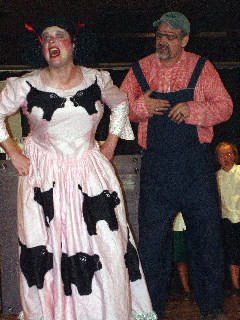 Everyone got to work with people from other cultures. It was difficult because everybody had different beliefs and ideas. As a result, we had to work even harder to reach agreements and come together. I could never have an experience like that in the United States. In Ghana there is no professional theater so a community performance is a really big event. The show ran for three nights and an audience of two hundred people enjoyed this hilarious comedy every night. During the course of the show I made many new friends and got closer to old ones. Once we put our heads together, the show became a fabulous success. I still hear the audience clapping and I often sing the songs from the show just for fun.

It was just magical how one group of people could create a performance out of just a script. One day there was no show at all. Then ten weeks passed and we had a final product - we went from words on a piece of paper, combined with our ideas, to a show that made the audience laugh. The whole experience - creating something live from a script while working with such diverse people - made me realize that I love theater. I enjoy being on stage in front of a big crowd and I like making people laugh. Thanks to the theatrical experience I had in Accra, I may decide to become an actress or at least make theater a part of my life in the future.

Magdalena Edyta Travis was born in Eureka, California on December 25, 1996. When she was five, her family moved to Krakow, Poland and later transferred to Accra, Ghana. Magda has gone to four different schools so far! She shares her home with her loving parents, a younger brother, Jason, a white golden retriever, Dino, and Latka, a lovely Ghanaian kitty she adopted in Accra. She speaks Polish and English.