My Children And Other Animals

Here in Italy, where I live with my family, the cockroaches are small and crafty things. You almost never see them.  They stay well out of sight, and their only desire is to be left alone with those microscopic fragments of Parmigiano-Reggiano cheese that they might be so lucky to gather here or there.  I mean, who could blame them? They’re shy creatures, and frankly, kind of cute. 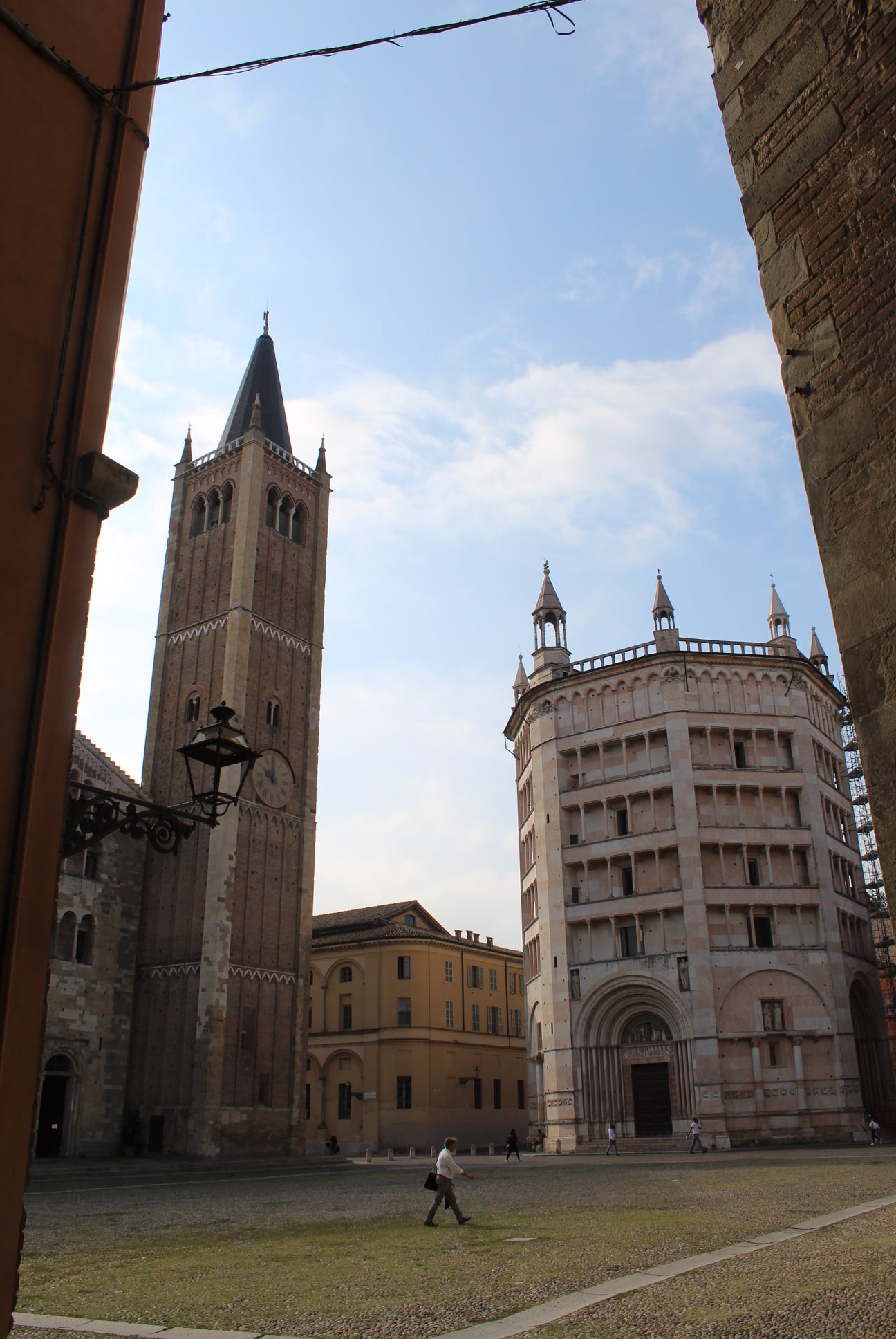 And yet my kids are terrified of them.  Now teenagers, my children are far smarter and world-wise than I was at the same age.  Nevertheless they won’t even approach certain corners of our apartment where a cockroach was seen several years before.

Now, I’d consider myself a father of the most encouraging and nurturing kind, but I find my children’s fear of Italian cockroaches unacceptable. They have no idea of the epic cockroach battles my sister and I went through in those distant semi-tropical summer nights, when we were growing up in Atlanta.

Back in Atlanta, the roaches could get as big as a can of Coke, and in the summer of 1987, if you were so unfortunate as to open the dishwasher between 11:00 pm and midnight, known to my sister and I as the “roaching hour,” you’d probably catch one of those gigantic diarrhea -brown pests by surprise and it would actually fly haltingly through the kitchen like a Wright Brothers aeroplane.  If you’ve never had a six-inch cockroach fly in your face in the steamy darkness of a summer night in Atlanta, well, you have no grounds being afraid of an elegantly-built little Italian roach who just wants to impress his friends with the expensive cheese he brought home.

My kids are also afraid of lizards.  Ordinary Italian lizards, no bigger than a Bic pen, without any special colors or markings. My daughter says she can’t stand the way they move.  “They just sit there, looking at you, as if they have no soul, and then suddenly they skittle away making that awful noise,” she says, “It freaks me out. You know what I mean, right?”

No. I don’t know what she means.  Back in Atlanta, my sister and I would wade through the murky waters of Nancy Creek every single summer morning, on our way to the swimming pool, and then wade back again in the afternoon.  Sure, we could’ve avoided crossing that jungle-like ecosystem teeming with cottonmouth snakes, screeching muskrats, and blood-sucking leeches, but it would’ve taken us an hour and a half to get to the pool instead of twenty minutes.  So my sister would bring a stick and bang it around on logs and the underbrush to scare off the snakes and I’d keep an eye out for the snappers.

Oh yeah, I almost forgot, a couple of alligator snapping turtles lived in Nancy Creek as well.  You know, the kind of turtles that lurk in the murkiest parts of creeks and grab children’s feet and never let go?  They lived in that ecosystem, too, feeding on unwary snakes and children’s little toes. My sister Nicole and I knew of their lairs, their evil hiding spots. We simply navigated around those unspeakable leviathans, while banging our sticks on logs and whatnot. Morning after morning.  Afternoon after afternoon.  Because we wanted to get to the swimming pool to hang out with our friends, and because we wanted to get home in time to see the M.A.S.H. reruns at 5:00.

It’s hard to deny that my sister and I faced some of the most dreadful creatures that the animal kingdom has to offer. And we built up a sort of immunity to them. I’m simply not afraid of wild animals anymore.  In fact, they totally fascinate me.

And yet what do I get, one generation down the line? I get children who are afraid of moths. Moths!

And it’s not like they’re afraid of those huge moths collected by serial killers and whatever.  It’s the little ones they hate, those insubstantial dusty things that only flutter around the house or near a fire, back and forth, here and there, as if unsure of which career path to pursue.  My son opens a closet, or the pantry, and a tiny moth flies out and… Horror show!  My athletic sixteen-year old boy, top student at the local liceo scientifico, is screaming bloody murder down the hall.  Oh come on!

For my children, only those animals which have been thoroughly domesticated and sanctioned by human civilization since the Sumerians settled in Mesopotamia are acceptable.  We’re talking about dogs, cats, and the occasional parakeet. That’s it.

I think to myself: I faced the gaping maws of killer turtles for this?  And there was worse. Much, much worse.

One morning in Atlanta, while eating breakfast, Honeycomb cereal if I’m not mistaken, I heard a scratching sound from the window next to the back deck.  It was a Saturday morning because I remember listening to American Top 40 on the radio; I think Hall and Oates had one of their big hits at the time.  Anyway I looked out the window, and there was a… a gigantic pink-eyed albino opossum staring me in the face!  I leapt back, spilling my cereal, terrified at the sight of its bizarre beady eyes and razor-sharp teeth.  Why oh why was a huge albino possum scratching on the windowsill at breakfast time, as if it actually lived in our house and wanted to be let back in to use the bathroom or something?  I thought about calling my friend David who had a pretty serious BB gun, but eventually decided to deal with the creature in a different way.  I knew of something far more effective than a BB gun.

It was a tried-and-true technique that Nicole and I had developed over the years, when facing deadly wild animals.

Ignore it, and it will eventually go away.

Which is precisely what happened with the giant albino possum. Never saw it again. Except in a nightmare or two.

Now, last summer, here in Italy we had a special guest in our apartment. That’s right, a small and very classy-looking gecko decided to spend the summer with us.  I was overjoyed.  My kids, on the other hand, were suspicious.  They brought out the usual complaints: What is that thing? What if it crawls on me while I’m sleeping?  Can you make it go away, please?

No, I would not make it go away. I welcomed the gecko, and gave it the name Becky. 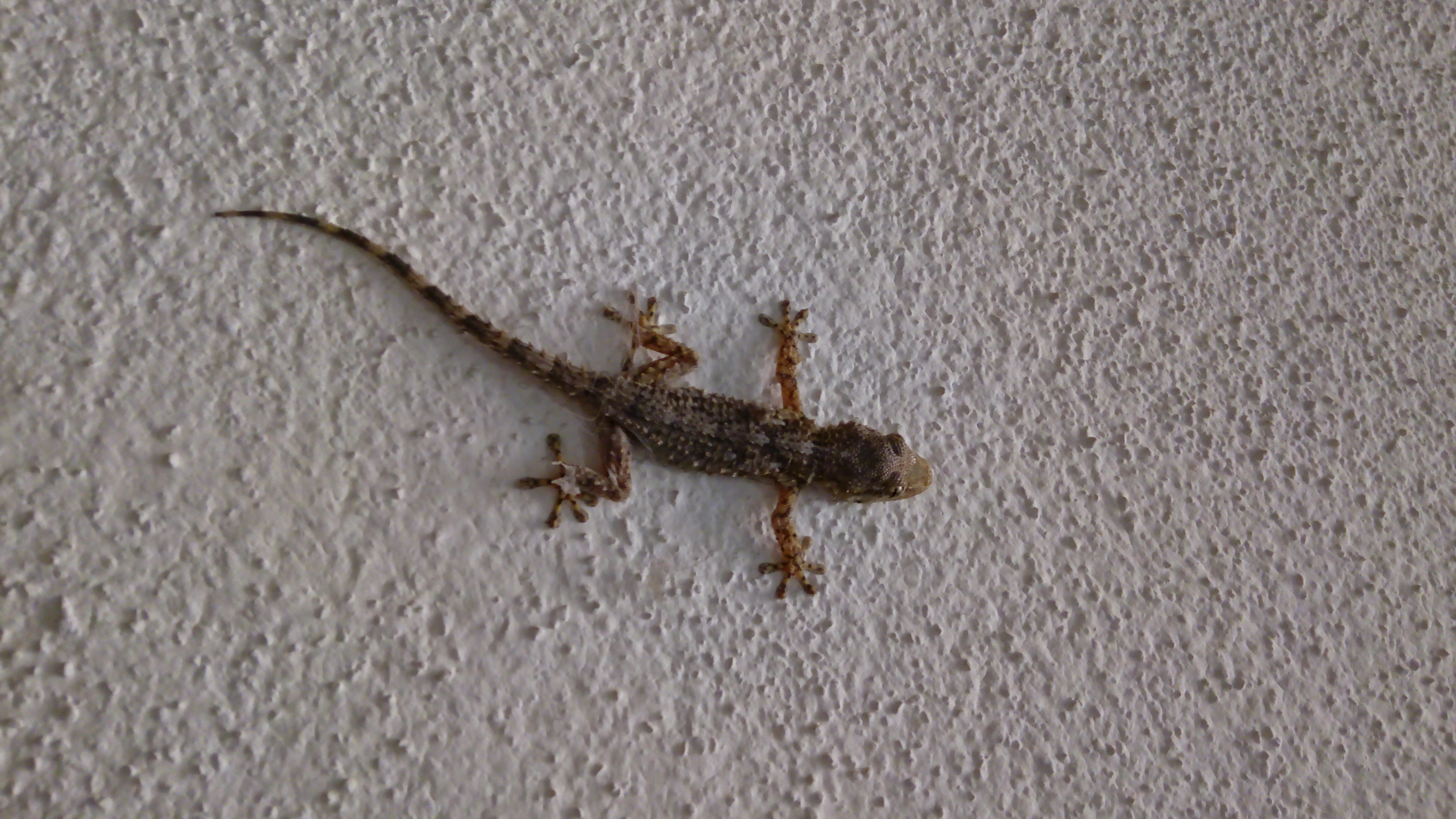 Becky would hang onto the living room wall, up high, with her cute splayed gecko toes, while I worked on my translations.  She liked all different kinds of music, from Mozart to indie rock to Italian rap.

But then a few days passed and I didn’t see Becky anymore. I thought to myself, Oh no, have I ignored her too much, and now she’s gone away? 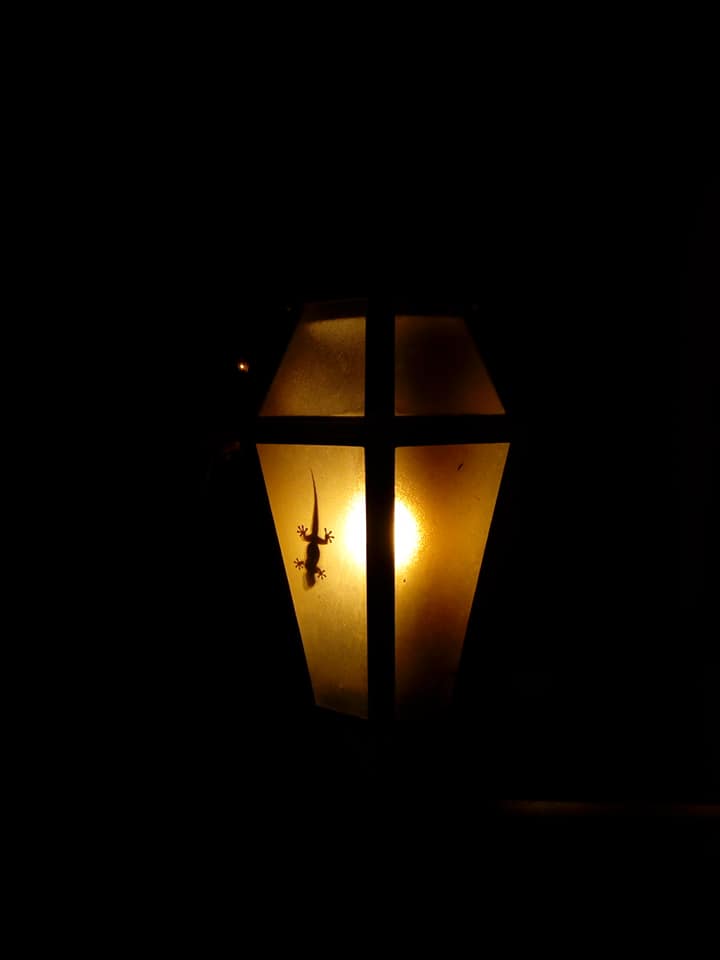 I got the answer soon enough.  One evening, just before opening a beer, I found that Becky had been caught in a bug trap that we used in the kitchen.  It was a sort of “roach hotel” also good for catching flies and mosquitoes, made of strong adhesive tape with a little cardboard roof over the top.  Becky had gone in there to feast on the bugs, and had gotten stuck herself.  What a tragic end to such a refined creature.  But wait, the tip of her tail was moving, and her eyes were blinking.  She was still alive!

I showed the trap to my kids and told them to have no fear, that I was going to free the gecko. They totally freaked out.  Both of them bolted to their bedrooms and locked themselves in, swearing that they wouldn’t come out until the ordeal was over.

Not the least bit surprised, I simply got some tepid water flowing in the sink, creating a warmish pool of water at the bottom.  Then I put the sticky “hotel” into the water.  Becky looked at me pleadingly, like, You’re not going to drown me are you?  No, Becky, I’m gonna give you a new lease on life!  It took about an hour and a lot of me patiently picking the adhesive away from the gecko’s fragile skin, and I’m pretty sure she lost one of her toes in the process, but at the end she was freed!

My reward came from Becky the Gecko herself.  Instead of running away, once she’d been freed from the trap, she decided to just hang out in the palm of my hand for a few minutes.  I knew she was probably trying to get her body temperature regulated. Still, it felt like a gesture of friendship and gratitude. I called the kids, Come and see!  I freed the gecko!  She’s just sitting in my hand!

No answer from down the hall.

I knew that if I wanted my children’s company for dinner, I’d have to find a new location for Becky.  So I placed her just outside our windowsill, near the flowers, thinking it might be a good spot to catch some bugs the next morning.  Becky seemed to understand: she crawled off my hand and remained stoically next to the blooming fennel as the sun set.

The next morning she was gone.  My wife claimed to have seen her once in early September, but I never laid eyes on Becky the gecko again. But now that the weather’s warming up again, I hope she’ll decide to pay us another visit. 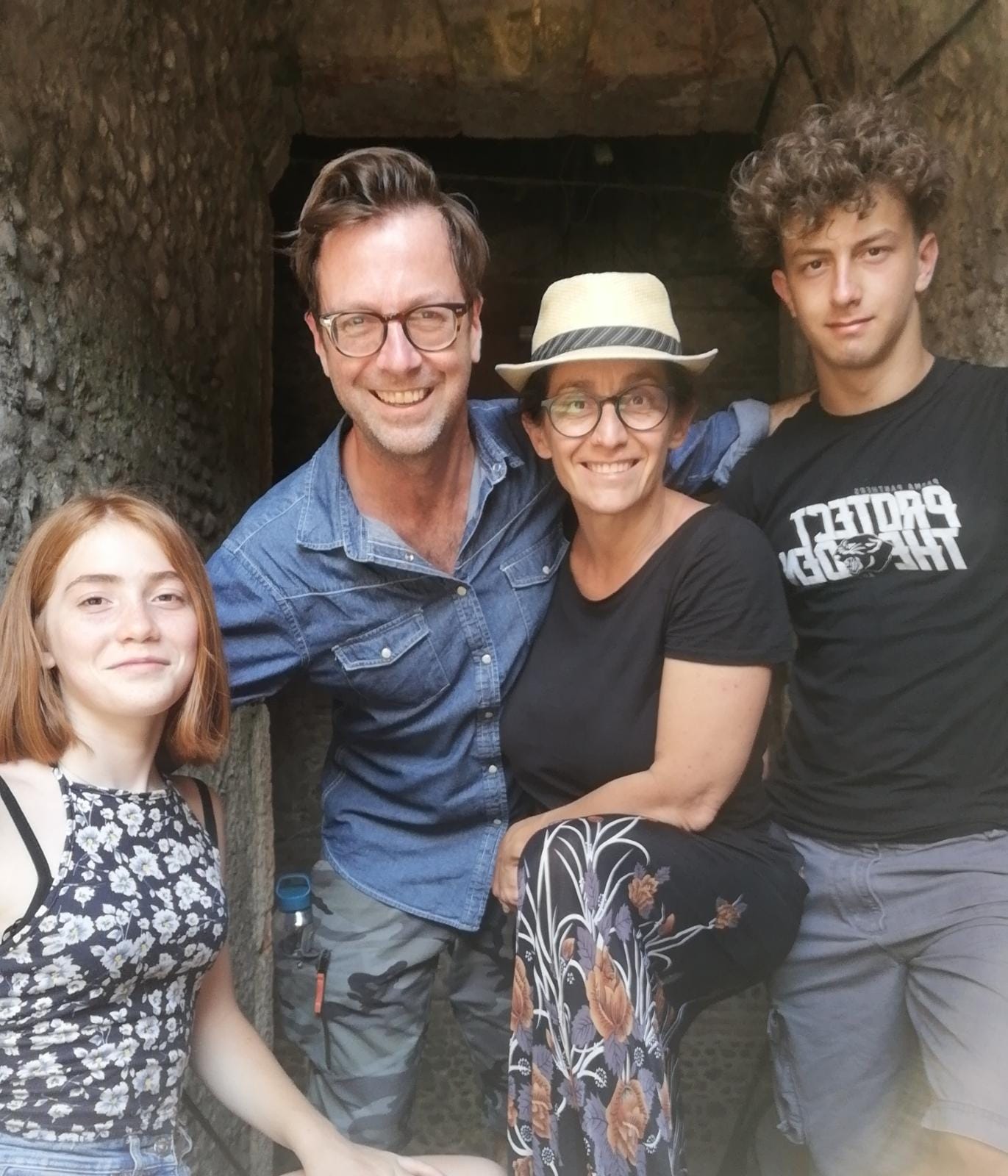 Not my kids, though.  I see them looking around, scanning the walls, and I know what they’re thinking.  They’re hoping that they’ll never see such a ferocious wild animal in our apartment ever again.

Alex Byrd Jones is a high school English teacher, translator, and courtroom interpreter from Atlanta who has lived in Parma, Italy with his family for many years. He is among the founders of the Sognambuli Parma Theatre Company and is the author of two mystery novels in Italian, as well as the early YA fantasy book "Stella Byrd and the Silver Shadow." Find out more about his work here: https://www.amazon.com/author/alexandrejones