“Nicholasa, you’re going to have a hard time in Spain with the food,” one Spaniard told me.

“Why are you going to Spain? You know they eat nothing but meat,” an American friend inquired.

I wasn’t even two hours out of the United States when the challenge and confusion around my not eating meat started to take shape. My vegetarian specialty meal was chucked like a shotput onto my tray; so much for the friendly skies. We’re all painfully aware that airplane cuisine is the worst on the planet, but that didn’t excuse the bland, overcooked, non-flavored meal set before me. I’ll give Iberia Airlines credit for not widening my thighs with fattening dairy products and sugar, but no meat does not mean no taste.

I had conducted basic research on Spanish life and cuisine, trying to prepare myself for food-related situations by engaging in vocabulary calisthenics and memorizing food terms so I would know what I could and could not consume. I learned that I would have some trouble procuring food from a grocery store on Sundays, since Spaniards take their day of rest seriously. Store closures for daily siestas, ranging sometime between 2 and 6 p.m., might also prove to be problematic.

Upon my arrival, however, it didn’t take more than 24 hours for me to fully comprehend how much the Spaniards truly and deeply love their meat. Meat of all kinds was on display in storefronts and at markets, and giant legs of ham rested on the kitchen counters of friends’ families. Bar after bar, bistro after bistro, restaurante after restaurante, it was more than apparent that Spaniards not only love meat, but meat stuffed in meat, maybe wrapped in some more meat served on some bread. For example, they put calamari in a sandwich. Jamon, of course, was made into a sandwich, and though not meat, even thetortilla española, a potato omelet, found its way onto some bread. Dining out can be an intimidating and overwhelming experience for the vegetarian. You don’t want to insult your host or friends by being too obviously careful that the prized jamon does not cross your lips - maybe you eat around it or slyly remove it from the course at hand. You want to make sure you don’t order something with meat in it, verifying with the camarero that yes, to me, vegetarian means no jamon will be mixed in the dish or sprinkled on top. 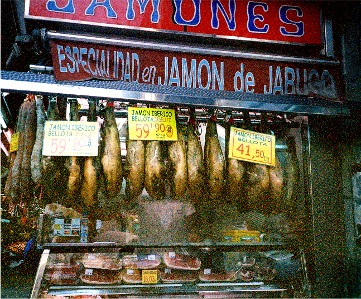 Yet even when that hurdle is overcome, what sensitive vegetarian can escape the spirits of the multitudes of deceased piggies whose 50, 60, maybe even 70 jamon legs are dangling from hooks overhead? You can feel the death. Okay, that may be a bit dramatic, but even anamigo madrileño admitted the sight was initially disturbing to unseasoned meat eaters, let alone vegetarians. In the same breath he had to add, however, that the first person to run screaming from the arena at a bullfight is always an American. I think Americans might be considered a wee bit wimpy by the descendents of the conquistadors.

Sitting down to a meal is of great importance in Spain. You don’t rush, and rarely are things para llevar, to go. I can easily spend one and a half to two hours over a platter ofpaella de verduras, vegetable paella, while my carnivorous friends tear into their favorite fleshy food products. The vegetables, the rice and the saffron are all delicious, but the flavors are secure enough to take a backseat to the time spent with friends, not dominating the palate, the conversation or the occasion, but contributing to the total experience.

Contrary to popular belief, Spanish food does not reflect the passion and fire often associated with the people, not spicy like many of our Latino favorites, but more a hearty, country approach to the native foods of the region. Bordering France and Portugal and looking to neighbors across the Strait of Gibraltar and the Mediterranean, Spain’s cuisine reflects influences from several cultures, with emphasis on Mediterranean and Middle Eastern flavors. Luckily, being from San Francisco and New York, I too am flavorfully influenced from many cultures. With touches of turmeric, scoshes of cumin, pepperings of paprika and of course, saffron, complemented by the old faithfuls of garlic, oregano, salt and pepper, I have found plenty of tasty treats in Spain, providing they are sans meat, of course.

Like those in New York, eating establishments in Spain tend to be small, with tables quite intimately situated to each other. No matter how nosey you don’t want to be, sometimes you just can’t help but covet - or simply inspect - your neighbor’s meal.

As plates are placed before me, subtle side glances more often than not ensue, and then within minutes comes the usual comment from the neighboring table, “You’re a vegetarian?”

Not wanting to get into lengthy descriptions of food allergies, preferences and issues, in the land where meat is king, the inevitable answer accompanied by a guilty shrug is: “Yes.”

“What brought this on?”

An ocean removed from the United States’ carb-counting, fad-diet ways: “How do you get your protein?”

Finally, of course, “What do you eat?”

What do I eat? Please recall the other items on your plate, while considering the plethora of choices such as garbanzos con espinacas, Garbanzos with Spinach; pimientos rojos, Stuffed Red Peppers; arroz con setas, Rice with Mushrooms; verduras a la plancha, grilled vegetables and much, much more.

No. Ham, like chicken, is not a vegetable! Nor is it a grain or legume for that matter.

Unfortunately, that little detail slipped the minds of some friends as they welcomed me to join them for a New Year’s feast. They were kind to point out the vegetarian dishes - or actually, in contrast, the non-vegetarian dishes - before everyone began to devour the courses on the table.

Grilled vegetables slide down the throat, mushroom pastries leap off their plates into our eagerly-awaiting mouths, asparagus wrapped in a lattice-style dough and crustinis topped with a tomato tapanade accent our plates. A hearty onion and bell pepper focaccia sits front and center, calling all who gaze upon it to take a slice - so I do. The Spanish flavors fill my mouth. Wait, what’s this? I slowly stop chewing and force a swallow as I covertly inspect what lies beneath the vegetable mélange. Oh no! It’s thin slices of jamon serving as a carnivorous platform to hold the grilled vegetables to the bread. If only I had known, I would have removed the pork product from my portion, but now the whole dish is a loss.

My hosts had the best of intentions and probably went out of their way to make sure there were meatless dishes, but vegetarianism, while making inroads in many cultures, is still a foreign, almost paralyzing, concept in the country where jamon de serrano was born. Maybe it’s time, I think, to initiate the inexperienced into the ways of meatless cuisine with products created in my kitchen.

Buying groceries seems simple enough, but with limited knowledge of the language, a common run to the store becomes a complex cultural exchange. Finding individual ingredients is easy, as stores in Spain, while often smaller, are laid out similarly to their American counterparts. Dry goods, canned goods, bakery items, cheese and dairy items and freezer sections line the aisles. There’s a butcher counter, but luckily I don’t need to stop there, and of course, the fruit and vegetable displays.

Combing the aisles, I realize I do more label reading than I’d thought, as I become unsure whether my Spanish coffee has been fortified with vitamins and minerals - or maybe that’s just the cookies? Is that bag of Lay’s chips really jamon flavored? If it looks like yogurt and is in the dairy case, it’s probably, hopefully, yogurt - and how cute, lunch-sized boxes of wine! - we definitely don’t have these back home. I confidently approach the produce stands and stride around them like a vulture circling its prey. Unlike independent vegetable stands, at some grocery stores you can select your own produce. Grab your bag and dig in while avoiding the looks shooting at you like daggers from other shoppers. Sorry, I didn’t see the sign that said touching the fruit is only permitted when wearing gloves. That little faux pas corrected, it’s time to head to the checkout.

The defiant flick of the plastic bag toward my already scanned food is the subtle message that we bag our own groceries here. I’m told the price, I pay, I am given the receipt, but I am perplexed by my missing produce sitting dejected near the cashier, just out of reach. Lessons learned: 1) wear gloves when touching all produce, 2) bag your own groceries, and 3) weigh and price your own produce or it won’t be included at checkout.

The harrowing trips to gather groceries all became worthwhile, however, after I cooked and shared a vegetarian feast con mis amigos españoles and was paid the ultimate compliment: “That’s some tasty vegetarian food. I never knew it could taste so good.”

Food is a vital part of the international experience, the process of adjusting to a new country and environment. For a vegetarian, this means navigating and adapting your ways to a new food culture. Sí soy vegetariana; yes, I’m a vegetarian. However, I did not starve, and I was not banished from society. I survived in succulent Spain, carne and all.Buen Provecho!

Hailing from the San Francisco Bay area and calling Manhattan’s East Village home for three years, Nichole M. Martinson now finds herself in the throes of planning her relocation to Southern Germany to teach English. Her varied employment history includes experiences in local and national television, independent film and assorted corporate environments. She is currently working as a Script/Continuity Supervisor in independent film while attempting to turn her travel and writing habits into a career.