Photos by Kelly Garriott Waite, and the drawing by SGC

The house is a disaster. The movers have just driven off, leaving boxes stacked to the ceiling in every room, claiming that unpacking isn't part of the contract. The kids are tired. The remote, not programmed to the new stations, brings in only static and French cartoons. Mike, the person whose job got us into this mess, is threatening to go to the office. I have to do something productive - make some sort of forward progression. I decide to go grocery shopping. I promise my husband a roast for dinner, anxious to try out my kitchen and hungry for something other than the slap-together meals we've been having in the days prior to our move.

"Do you need anything?" I ask Mike.

"Beer," he says. I add it to my list and trip out of the house, laughing at my freedom, laughing at the image of my husband looking glum standing there among the towering boxes.

Of course I've heard the expatriate shopping horror stories: A woman goes to the store to buy oatmeal and comes home with laundry soap. A man craves his favorite crackers, picks up a box of something or other, scrutinizes the picture and wonders if he'll hit the jackpot this time. But I know that sort of thing only happens in countries where you don't speak the language. I won't have that problem. I mean, we moved to Canada. Five hours north, if you drive straight through. It can't be that different, right? 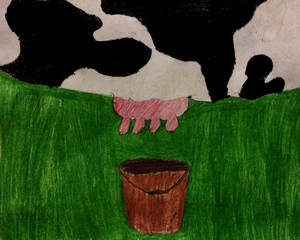 Do you know how embarrassing it is to have to ask for milk in a grocery store? I can understand some exotic spice for some crazy recipe pulled out of the back of your recipe box. But asking for milk? It's unforgivable.

I choose some young kid - he probably works at the store after high school. Young enough that he hasn't lost his respect for his parents. For older people. For strange women who have no idea where to find the milk. He looks friendly enough, anyway. Wrong again: The guy looks at me like I'm from Mars as he leads me to the dairy section.

"I looked here," I say, wheeling my cart briskly after his efficient stride (is he trying to run away?), wanting an A for effort. Wanting him to know I'm not helpless. Not stupid. 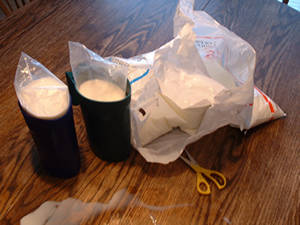 He picks up a plastic bag and hands it to me. I look at the bag. Four liters of milk. Great.

"Don't you have jugs? Cartons?" I don't care about the pleading tone in my voice. I just can't deal with milk in bags today. Not now. Not one day after we've made this move. I need something to be simple.

"No," he says, slowly backing away from me.

I have to say something. Offer an excuse for my apparently odd behavior. "I just moved here," I say, "From the States."

"Oh," he says, as if that explains everything. I watch him make his escape and feel the tears well up in my eyes as I stand there helplessly holding a damn bag of milk.

A woman approaches, clearly a mother. She has that exhausted look. She hoists three of the bags into her cart and begins to wheel away. Perhaps she senses my frustration. She arches an eyebrow in my direction.

"There are three small bags of milk in each big bag. You put a bag of milk in the pitcher. Slam it on the counter a few times. Be sure you slam it well. Otherwise the bag will fall out when you start to pour. Then cut it. But be sure you don't cut the hole too big. And cut it on the diagonal. Otherwise, you'll spill milk everywhere."

Is it just me, or does that seem a bit complicated just to get a glass of milk?

Exactly what is a kilogram? I go to the butcher counter and order a three-pound roast. Four pounds of chicken. Stewing beef. Hamburger. Steaks. I feel the eyes of the other shoppers silently condemning me for not knowing the metric system. A dead giveaway that I'm American, a rebel voice among this chorus of grams and kilos.

I can't find the beer anywhere. I don't dare ask, not wanting to make a fool of myself again. I head for the checkout.

The cashier is friendly. "Did you find everything you were looking for today?" she says with a bright smile. Should I ask her? 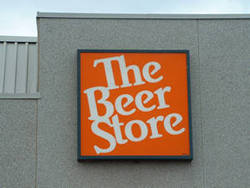 "Well, I couldn't find where you keep the beer."

"Beer?" she asks, confusion all over her face.

Do they call it something different up here? What's the French word for beer again?

"No," she says, beginning to pass my groceries across the scanner belt. "I'm totally serious. You new here?"

I don't bother with explanations. "What's the name of this beer store?" I ask.

"The Beer Store," she replies. A clear "duh" tone in her voice.

And as I'm driving home, I see it: An orange sign with the words, "The Beer Store," written on it in white letters.

I see that the meat I ordered in pounds is labeled in kilograms. I have every intention to re-label it in pounds after the groceries are neatly stored away, carefully transcribing my grocery notes to each package. But it's lunchtime and the phone rings and besides, I've already lost my grocery list. My husband enters the kitchen. "Did you get the beer?"

I'm lost when I begin to prepare dinner. How much is a kilo again? By the time I get the kilograms translated to pounds and Celsius converted to Fahrenheit, I'm exhausted. I toss the roast into the freezer, pick up the phone and order takeout.

Kelly Garriott Waite is a writer who is currently leaving Toronto with much regret. She may be reached at kgwaite@gmail.com.