Neh: Learning "No" in Bulgaria

It was early on in our posting to Bulgaria. I’d learned a little Bulgarian. I’d tried to get sensitized to Bulgarian ways (though our best is still only our best, right?). I had read all the stuff about Bulgaria that I could find. I wanted to really be in Bulgaria, and not just passing through.

I learned from the one travel book on Bulgaria I could find at Barnes and Noble that the country is famous for yogurt, rose oil, and wine. The yogurt is especially good for you and tastes great, the rose oil is so superior that it’s the foundation for most of the perfume that comes out of France, and Bulgaria has mysterious and wonderful varieties of wine that I had never heard of before, like Mavrud, Melnik, and Gamza, which are excellent and incredibly inexpensive. I discovered on arriving that they love kids, with the notable exception of orphans. They, like their Romanian neighbors, are famous for their poor treatment of orphans, but they loved my kids, and they love most of their own kids.

After a few months of living and working in Bulgaria, I also learned that the country is known for mafia infiltration, rampant corruption, and institutionalized thug-ism to an extent only hinted at in the travel book. When you arrive you quickly learn which license plate numbers are thug numbers: 6666. 5555. They can also be government numbers - you can make your own leaps with that bit of information. I already have. And driving in the capital city is miserable. Walking in the city is even worse. They park on the sidewalks and walk in the streets. It’s a Darwinian system, but I’m still alive.

But the favorite Bulgarianism of all is the well-known (among Eastern European travelers) peculiarity of shaking their heads when they mean yes and nodding their heads when they mean no. Frankly, it isn’t all that simple though. There is a sort of Bulgarian head bobble that means, to an American, something like “who cares” or “who knows,” or even a sort of adolescent “whatever.” Maybe it is a post-communist show of resignation and defeat – not so much the gesture of a snide adolescent as that of the worn out neo-proletariat just trying to get by. But the nod is their thing: the shake and nod that defies all of your expectations for the language of head movement, of body language, of non-verbal cues.

That’s fine. That’s their thing, I say to myself, as I start my journey in Bulgaria. That’s what I thought, but I was wrong.

It’s actually massive, but not because of the simple fact of the (to me) backwardness of it. Rather, it is because trying to speak a language you barely know without the help of gestures feels like the equivalent of having a stroke. A linguistic stroke. You can’t talk, and you can’t move. You just stand there, not knowing what to do to get your point across. It’s both unexpected and devastating to be without a head gesture when language eludes you. The well-placed nod or head shake is all that a non-Bulgarian speaker has to make herself clear at a store, to a cab driver, to the lady selling movie tickets. “Yes,” this nod says, “You’ve got it. Two tickets. Middle of the theater, please.” The nod can do it all, you hope. But it doesn’t.

I’m capable of saying yes and no in Bulgarian, of course, but sometimes I just want to rely on the simple nod or head shake. We do it without thinking, don’t we? And we read the shakes and nods of those who are unable to make themselves understood to us.

I went to the Shell station one night, late, because there’s a mini-market in it. It has a 7-11’s worth of stuff, even rotisserie chicken and espresso to go in thick paper cups, instead of the finger-burning plastic ones they use elsewhere in the country. It’s a good, easy, quick stop on the ring road on the way home. My husband was driving, my kids were in the back seat, and I needed some floor cleaner. It’s a long story for another day, but let’s just say that for perfectly good reasons, my housekeeper is in charge of not only the house, but also me, and she ordered me to buy one bottle of yellow Mr. Proper floor cleaner before she arrived the next day. I do as I’m told.

So we go to the Shell station. They might have it. I ask the man behind the cash register, up on a platform looking down at me, “Ima te li Meester Proper?” He nods his head and says, “neh.” “Aha,” I say, ever so pleased, in my best, though deeply accented and flawed Bulgarian, “then where is it? On which aisle?” He repeats his previous reply, and he repeats his previous head nod, “Neh. Niama.” I’m confused. He said he had some. I want to know where it is. But, in spite of my hard work in Bulgarian language class, for all of my best efforts, I am not able to elicit the aisle on which this mysterious bottle of Mr. Proper is to be found. This man doesn’t get the look of disappointment I’m going to get tomorrow from my housekeeper. I’m running out of patience. It just has to be easier than this for everyone else in the world who happens to be looking for floor cleaner right now. I am picturing the massive, utterly American Wegman’s grocery store in DeWitt, New York right now, with aisles and aisles of well-labeled products in lovely rows, and it isn’t helping my mood any. 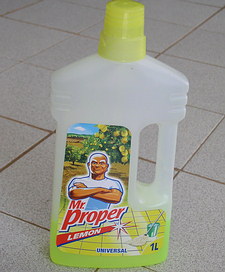 And then, like a crack of thunder, it occurs to me what has happened. I am an idiot. To translate, I asked if he had Mr. Proper, he nodded and said he didn’t, and I, like a simple-minded fool, said, “Great! Excellent! Where can I find this Mr. Proper that you apparently don’t have any of at all? On which aisle shall I go to find this Mr. Proper that you haven’t got? Where? Which one?” Smiling up at him on his stage, like student to professor at 1930s Harvard. Like determined and hungry but fearful Oliver to that mean man who won’t give him another bowl of nasty porridge.

I crawl out of the Shell station with a mumbled, “sorry for being a total idiot, Mister. I’ll go to a different Shell for a while in hopes that you’ll forget my face.” No, I didn’t say that. That’s what I thought, but I said only “sorry.” Insufficient to the moment, but all I had available in my repertoire.

I get to the car. No Mr. Proper. Michael asks about it. I say, “Yeah, well, they didn’t have any.” He starts to laugh. He can’t help himself. Turns out the entire debacle was witnessed by one of the drivers from the Embassy who knows Michael and me, but who I didn’t notice, with my single-sighted quest at hand, and the driver comes out, tells Michael the story, they both have a good laugh, and then the driver takes off, leaving Michael to harass me just a little for my cultural moment.

That’s what it was, right? Just a simple cultural moment. Then why is it, do you suppose, that I can still remember every embarrassing moment of it these 15 or so months later? I remember it because it is what it is - it is what we do when we leave home. We try to manage, we grovel sometimes, we get proud sometimes, and then we are brought low again. Everything is something we need to think about, a lot, and when we don’t, we are left asking, “in which aisle can I find this Meester Proper of which you have absolutely none at all?” But I wouldn’t trade it for the world. It’s what we do.

Bonnie Carlson lived and worked in Sofia, Bulgaria for two years (2002-2004) before moving to her current home in Dhaka, Bangladesh. While in Bulgaria, she was an English professor, an embassy employee, a Peace Corps contractor, and a volunteer working with orphanages around the country. She travels with her husband, Michael, and their two children, Esme and Aiden.