From Academia to Adventure 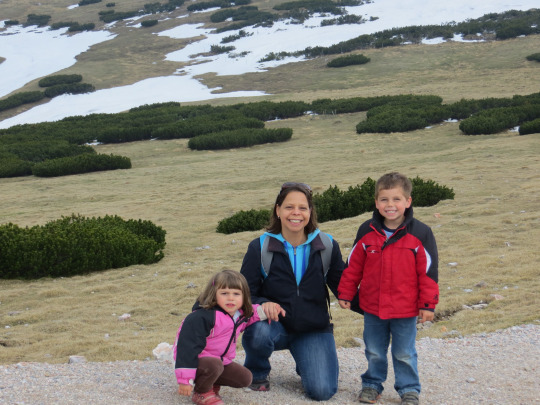 I am sitting on a plane, all alone for the first time in what seems like ages,enjoying the luxuries of a glass of wine and my music on my iPod. I am not searching in-between seats for lost Playmobil horses or digging through my bag in search for the “right” colored pencil.

I am flying back to Vienna after spending a few days at a professional conference a mere two hours away. For a few, very precious days, I – not anyone else – was the center of my life and attention. Instead of negotiating clothing options with opinionated toddlers, I was dressed in my “finest” (still fitting) business attire and enjoying lectures and discussions about health issues around the world. I was called “Dr.” again; delegates spoke of my previous work; and the main publishing vendor was proudly displaying a book I had co-edited. To say this was a nice change would be an understatement; I loved being “someone” again, not being defined by my husband’s (successful) career and status.

The last time I traveled anywhere by myself without schlepping babies, toddlers, or ginormous bags stuffed to the fullest with diapers, extra outfits and toys, was five years ago. I kid you not. Five years.

I still remember that trip. I was seven months pregnant and very conscious of the fact that any type of travel following this last flight on my own would be altogether different. That last trip alone took me to Baltimore for a work meeting at a time when I loved my job as a research scientist. By then, I had completed nearly a decade of post-secondary education in the U.S. and Canada, far away from my native Germany, to receive those three precious letters to be put after my name. I was proud to hold the second quickest record for graduating with a Ph.D. in my graduate program so that I could jump right into more schooling to specialize in the new and exciting field of “urban health.”

As an emerging research scientist, I loved learning about the complexities of urban life and social inequalities. I spent hours digging through the literature to gain insight into the deceptively easy but nevertheless difficult question of “what works for whom and under which circumstances?” I enjoyed playing an active part in trying to solve that puzzle, debating questions and ideas with others who shared my passion for understanding the lives and predicament of marginalized populations like those experiencing homelessness, HIV/AIDS, mental illness, domestic violence, and substance use. To this day, I am still asking myself how we can improve the life and well-being of disadvantaged people and don’t quite understand how anyone cannot realize the vast importance of addressing these disparities.

My last flight alone was followed not just by the arrival of a new family addition but also by another major life change. It’s certainly not uncommon for working mothers to trade their business suits for Mommy jeans, but the arrival of my son also coincided with my husband’s dream job – as a U.S. diplomat – suddenly becoming a reality. Just when I was barely mastering the art of putting on tiny diapers and sleeping in 30-minute intervals, I was whisked away to a new city and into a new and mysterious life of the great “Unknown” and never-ending “TLA’s” (Three Letter Acronyms; one cannot work for the government unless speaking these proficiently).

In a matter of months, I was no longer a researcher or a financially contributing member to our family. I had moved onto being the “trailing spouse” – a term I simultaneously love and hate as it signifies that I now depend on my husband’s job and income and am expected to follow him around the world. Our new life has taken us to Washington DC, São Paulo/Brazil, Washington DC (again), Vienna/Austria, Washington DC (yet again) and soon Ulaanbaatar/Mongolia (yes, Mongolia!).

For five years and counting, this has been our life. It’s been wonderful, terrifying, scary, amazing, and everything in-between. I wouldn’t trade it for anything (yet) although this is certainly not an easy life or the right fit for everyone.

I – like many other trailing spouses - have also been wondering what my working life will be like when I decide it’s time to return to the paid workforce. It’s not as if I haven’t kept busy all these years. In addition to keeping up with every single demand of raising two small kids, I’ve been the official Logistical Operations Coordinator (the LOC - another unofficial “TLA” I am adding to the growing list of acronyms) for managing our international moves. Aside from keeping careful records of our belongings as they traveled around the world, it has also been my job to explain and sometimes defend out of the norm medical decisions we made for our children such as de-worming treatments or vaccinations against TB, European ticks, and rabies (yes, rabies).

On top of that, I’ve made the most out of not working for pay; I’ve actively kept in touch with a research unit from my former work life, co-written a few academic and lay publications, and volunteered extensively for the support organization for members of the U.S. Foreign Service. Of course, none of this was for financial gain but for my own personal growth and doing something that kept my brain active on top of desperately conjugating verbs in foreign languages. Still, while I had that tiny bit of time set aside to “work,” the bulk of my everyday life was consumed by my family’s needs.

As I am sitting on that plane, with my glass of wine in one hand and my iPad in the other, I am putting my nomadic life and working career into new focus. I am realizing for the first time that I did not “just” trail behind my husband’s work but that these few years have given me unique insight into my previous work and what I thought I had learned and understood about life.

For example, I had never been to a country that had a “linha preferencial” - a special check-out line at every grocery store reserved for parents with small children (in addition to others needing quick assistance) – until we moved to Brazil. Brazilians adore children so naturally, everywhere we went, our children were excitedly greeted by strangers shouting “que lindo” (how beautiful) and often offered treats. Of course, this adoration came with challenges like the time I took my almost 2-year old son aside at a local indoor playground and asked him to sit alone on a bench because he was misbehaving. The Brazilian mothers and nannies were outraged that I allowed my child to yell and throw a fit while I turned my back. And then there was the time I discussed the merits of sleep training with our wonderful, always cheerful housekeeper, Lucia, who was pacing the hallway nervously (and for the first time not so cheerful) as I was allowing my daughter to cry herself to sleep for a much needed nap.

Outside our home, away from the safety of alarm systems and guards, was the constant threat of violent crime. Whereas Brazilians talk more with a tone of annoyance rather than fear about having their car stolen when, in fact, the term “car jacking” is much more appropriate, I was far more fearful – afraid of one day falling victim (which fortunately never happened). Experiences such as these began to make me question what I had studied about urban life and poverty as a researcher and decisions I had made as a parent – decisions I reached after carefully investigating what American experts advise. I was beginning to wonder if I had gotten it all wrong.

As my mind drifts to my current life in Vienna, I think about the city’s architectural beauty, its cleanliness and safety, and how strangers would never think about handing out treats to a child they didn’t know but would not hesitate one minute to point out their misbehaviors to parents. I am also thinking how strange it is for such a beautiful place full of fresh clean air and amazing green space to not enforce anti-smoking laws. It seems that everyone smokes in Austria and while restaurants now offer non-smoking sections, the bathrooms are still predominantly located in the smoking part so I am left hurrying my kids from the “safe” smoke-free side of the restaurant to the much needed bathroom. And then there are also smoking rooms inside hospitals that remain a mystery to me and make my explanations about the dangers of smoking more challenging when my children think of hospitals as places for healing and recovery.

Sitting on that plane and reflecting on my international experiences makes me appreciate that I have been working all along, making use of my education and skills in practical ways to adapt and normalize our nomadic life. So while I may never fulfill my previous goal of becoming a traditional research professor whose work aims to uncover and test new theories and discoveries, I am, at last, fine with that.

I am realizing that my studies have helped me look at the world in a certain way but my nomadic lifestyle and travels have shown me that there is more to be learned, other cultural viewpoints and contradictions to consider, and that often all that’s written in books is not telling the entire story. So, I will keep on thinking how I can create my own niche in this trailing world to carve out a unique career by combining my acquired skills and nomadic experiences.

I have some ideas forming in my head as to how that might work but now it’s time to follow the flight attendant’s persistent request to power down my iPad and finish that glass of wine so that the plane can land. I am back “home” in Vienna now and eager to see what new experiences and opportunities lie ahead.

©2015 by Nicole Schaefer-McDaniel. All rights reserved.

Nicole Schaefer-McDaniel received a PhD in Environmental Psychology in 2007 and traded academic life for adventure two years later to follow her husband’s work around the world. A few international moves and two kids later, she is returning to her work-for-pay roots with her consulting business (http://schaefermcdanielconsulting.com/approach-services/). Aside from writing and editing never-ending moving lists, Nicole is also the Real Post/Real School Reports Editor for Tales from a Small Planet.