La langue means “the tongue” in French, and for the language-learning stories I want to share with you, we’ll begin with the French langue. That’s exactly the part of me that was tied in a sailor’s knot when I sat staring into the large melted-chocolate eyes of Madame M., my three-year-old son’s teacher at a public maternelle in Versailles, France.

She had called a special conference with me after school hours. I’d spruced up, throwing on pearls, ironing a seam down the front of my pantyhose, and brandishing killer heels. I came quickly, mincingly, trying to learn French, which I had never studied but was determined to learn. Like now. In the space of three city blocks.

Although the heat between us told me right off this was serious, I had no idea what “crache” meant. So I took a stab (which you should never do in French unless you’re fencing) and guessed it meant the obvious: my child was crashing into the other children. Head butting. My three-year- old, tow-headed fullback.

“Il crache?” I asked in falsetto.

“Oui, Madame,” she dropped her eyes, pain wrinkling her forehead. It was very touching.

“Aux enfants?” I winced, burying my chin in my chest, my shoulders drawing up to my earlobes.

We sat for maybe five seconds in silence. She stared into her lap. I stared at the part down the middle of her hair.

“Vraiment?” I said, double-checking if this was true, since Dalton really wasn’t a violent boy at all. “Il—” and I made a head-butting, full-back movement. Crashing. Into imaginary other children. “Il crache?”

Madame M. looked up at me, perplexed. Then, like floodlights flipping on over a soccer pitch, she said, “Oh, non, non, non, Madame Bradford!” Then she laughed.

I laughed, too, relieved. Thank heavens my son wasn’t doing something as coarse and as crude as head-butting.

“Non, Madame, non, non.” She then cleared her throat and straightened her skirt. “Il crache!” said lovely Madame M., as she drew herself together to demonstrate what was meant with the words.

And with that she spat.

“Oh. Voilà.” A slight tide of nausea swept over my torso.

I interrupted here by spitting, my brows drawn up, questioning if I’d understood.

Wiping a fleck of wayward spit from her cheek, Madame M. gave me a polite, though mildly repelled, nod.

That opaque moment of total incomprehension. That awkward gawk of completely not understanding. I know them both too well.

Over our 20 years of moving between eight countries and five languages with four children, you can guess that everyone in our family, in fact, has known, firsthand and frequently, language panic. Getting to a point of understanding in a new language requires a journey, and that journey starts at mystery. You begin with that gluey stare of total whuh? Then you must endure misery, humiliation and heavy sweating, to get to that magical click! when the door of communication creaks open and you and your conversation partner become fully human to one another. Members of the same species. Talking, sentient beings.

So how does one get from mystery to miracle? As any language teacher will tell you, it’s best to begin in infancy, as a child. But what if you are arriving in Versailles, let’s say, in your thirties? What then? My answer is: become a child. Or at least become like one. Squat, get down on the floor, crawl if you have to. Make strange noises and bawl if needed. Just be sure to leave your composed, adult self behind. David Sedaris describes this experience with learning la langue as an adult, when he moved to France:

I wanted to lie in a French crib and start from scratch, learning the language from the ground floor up. I wanted to be a baby, but instead, I was an adult who talked like one, a spooky man-child demanding more than his fair share of attention.

The advantage you will have as a parent of children is that in tandem the two of you, you and your child, will learn from the ground floor up.French, my husband and I picked up with our little children who attended French schools. Dalton and Luc, over the course of our several years spent in the City of Light, became comfortably fluent speakers of la langue Française.

And, with another move, there was Norwegian. We learned it with our other two children who went to Norwegian schools. For a glimpse of what that looked like, let me describe:

Our Parker and Claire have invited over half the local outdoor kindergarten, or barnepark, for an afternoon. In NASA-like snowsuits and chunky lunar boots, the kids are stampeding through our home of two months, which lies just outside of Oslo. Jesper, Eirik, Maria, Knut, Magnus, Karolina, Per-Ole, Louisa, though they think they’ve come to play, have actually been recruited to bring Norwegian under our roof in a full speed gallop. They’re better than Berlitz.

I play the half-mute, the kneeling hostess, the crawling mom who goes everywhere the conversation goes. I become a child. Like them. I’m watching the kids’ lips, mouthing sounds with my brows furrowed, questioning them on every expression, and, like a reporter, I am repeating in a murmur every turn of phrase, writing things in some little notebook.

Most of the time, these kids smile. Other times, they stop, turn and speak right to me. They stare at me as I kneel at their feet, and with their noses scrunched, say, “So … you’re not one of us, are you? You’re not Norwegian?”

“Nei. Egentlig ikke,” (“No, actually not”) I answer, trying not to reveal that I’m disappointed I’ve been outed so soon. “But tell me, my friend,” I continue, pulling in every last Norwegianism I can come up with, “How in all the world did you know I’m not Norwegian?” The flashy Jersey Girl clothes? The eye makeup? The American children, perhaps?

“I know,” Karolina says, “because you speak a little bit weird, you know. A little strange. Funny.” Her eyes are a contact-lens shade of cornflower blue and each one as big as a hockey puck. Cautiously, she asks, “Are you mentally ill?”

I actually don’t understand her last question right off, and have to call over her friend Louisa for a little conference.

“Oh, yes,” Louisa explains, smacking her own skull with a ball of wooly fist, “Hjernet syk, like if your brain is hurt.” She places a small, mittened hand on my forearm as if to steady me. Her eyes swim and blink under snow white brows, “But Mamma says you’re not dangerous.”

I take my lightly bruised ego around the corner, searching out my own two, certain that, at five and three, they’ll need my linguistic skills to manage this group play date. Before I find them, though, I hear chatter. It’s that hippety-hoppity, loopty-loo curlicue of children’s Norwegian, and it’s coming from outside the large ceiling-to-floor kitchen window.

There stands a row of children, their pillowy faces pressed to the transparency, mouths and nostrils shooting little gusts of spirit that cling to the glass, like ragged circles of moist gauze. It’s only then that I notice this most amazing thing: Parker and Claire, heads bobbing easily while their mouths speak Norwegian, tumbling and climbing with these others from whom they’re indistinguishable, these small bodies weaving in and out of lights and shadows. A small miracle.

A few weeks later, I am sitting in a wooden barrack that serves as a noontime refuge at the local barnepark where our two are enrolled. Hanging with children is how I not only keep an eye on my little ones’ cultural assimilation, but how I learn Norwegian from native children as well.

“Does any one of you sweet children have a favorite song?” I ask in Norwegian during music time. Already I’m feeling the stage fright of Carnegie Hall, and all because I’ve got Karolina and Louisa eyeing me cautiously, watching for a badly turned vowel. Or dementia.

“Anyone? We’ll sing your favorite song together, how’s that?”

We sing a whole recital, those children and I, and on the last song, I lower my volume so I can hear, rising from either side of me, the voices of Parker and Claire. They are singing at the top of their lungs and in native Norwegian.

In that moment, I want to dive on my knees the way I’d been on my knees scampering after their vowels and conjugations in my home. I feel like collapsing on those knees with thanks to these children, including my own, and I want to cling to them. They had some magic about them – small good luck rabbit feet, all of them. So even if not literally on my knees, I kept on my knees in a manner of speaking. Because that’s how learning language with and from children made me feel: ever their humble rabbit-foot-licker.

And then there is German. And Mandarin. With all these languages, we learned like children and with our children. Moving through mystery to miracle – from frozen wordlessness to chatting up the Singaporean fish monger in his native tongue about the best way to prepare fish head curry – was, I’ll admit this, sometimes messy. But it had to start somewhere. So we chose childhood.

Over the years, we’ve returned to Versailles and to the very neighborhood where we first arrived in France. That was many years and a few languages ago. It was a time that made us adults as much children as our children were: apprehensive, uncertain, speechless yet incredibly eager. I’ve walked up the narrow road to the local maternelle, and have searched, without luck, for Madame M. What would I do if I found her? I think I’d stride up to her with Dalton (now taller than I) at my side. I’d probably let this strapping young man introduce himself and speak to his Madame M. He’d address her, as I imagine it, with his resonant voice, my now-college-bound man-child, and carry on a conversation about, well, about anything she or he wants.

All this would happen, as I envision it, while I heave a long sigh at a small miracle, and while he carries on in fluent (and spitless) French.

© 2013 by Melissa Dalton-Bradford. All rights reserved. 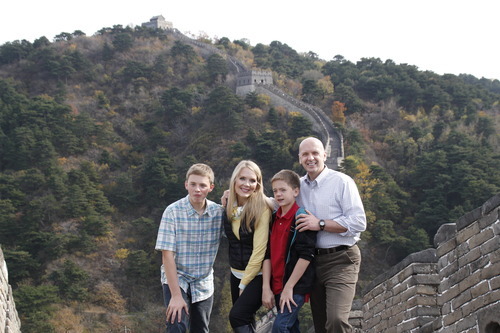 Melissa Dalton-Bradford is the author of Global Mom: Eight Countries, Sixteen Addresses, Five Languages, One Family (Familius, July 2013). She holds a BA in German and an MA in Comparative Literature, both from Brigham Young University. The book explores the challenges and triumphs of her family’s nomadic life, of motherhood under unique cross-cultural circumstances, and how – despite all of this – she has flourished as a mom, writer, teacher and trained thespian having taken the stage as a soprano soloist and actress in the U.S., Scandinavia, Central Europe and South East Asia. She and her husband raised their family of four children in Hong Kong, Vienna, Oslo, Paris, Munich, Singapore, and Geneva, Switzerland.