“You’re not stupid; you just don’t speak German,” I had to sternly remind myself as I picked up a pamphlet from a streetside kiosk in Berlin and was frustrated - mortified even - that I couldn’t decipher a single word, let alone the general message conveyed via leaflet to the masses.

Sure, I know I’m in a foreign country, but even after having lived in New York City -where English isn’t necessarily a priority - I had forgotten what it’s like to not be able to communicate. Can anyone remember back to the days of early childhood when letters, words and sentences were nothing more than an indecipherable, collective noise? Can any of us recall what it felt like before we could understand the groupings of letters that make up written language?

Street signs and billboards are collections of incomprehensible scribbling; the pre-recorded voice announcing each U-Bahn stop, a whirl of sound signifying nothing. Conversations fly at breakneck speed as happy and important chatter is exchanged among co-workers, friends and significant others. Food vendors and grocery stores take me back to times when I used pictures and touch to decide what I wanted, not words.

“You’re not a moron, you just don’t understand German,” I caution myself again. 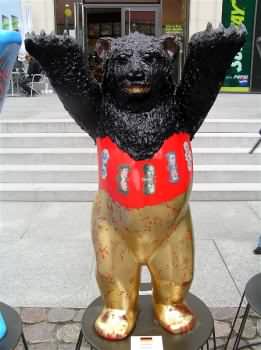 Somehow, through what is best described as a random series of events, I’ve landed in Germany; not for school, not for work - and please, I know you’re thinking it, not for a man. The questions “Why?” and “For how long?” remain to be answered, but in Deutschland I am, so in Deutschland I will try to survive, excel or at the very least, blend in.

People stop me on the street, at landmarks and monuments and in train stations to ask me for directions - and my face glazes over with that blank, not-fooling-anyone stare. I undertake an extensive mental search, going through language and communication filing cabinets, and still I come up blank. No sentence, no word, not even a tiny squeak escapes my mouth. After a few seconds of no response, people’s looks toward me change from inquisitiveness to disdain or maybe pity, eventually followed by the reflective expression of the realization that I don’t speak German: “Ach so,” a term I later learned is the equivalent of “I see.”

Days pass and my hunger becomes obsessive; the pangs of starvation are demanding: “You must eat!” Food procurement and any possible interactions, verbal and non-, that might come with the territory, can be put off no longer. Preparing for my mission, I memorize a phrase with which to order some food. I step up to the white counter and address a seemingly pleasant worker adorned in some kind of unflattering uniform and deliver my sentence.

I feel good, confident; I’ve made my request properly and seemingly understandably. Then, just as quickly as my ego rises a notch, maybe two, it’s swiftly dashed when the unthinkable happens; the vendor asks me a question. No, not a question; you seemed so nice! How could you do this to me? Please, anything but an actual exchange of dialogue! I concentrate as hard as I can trying to dissect any fragment of the question I might possibly have learned somewhere, somehow, but sadly, nothing comes to mind. I frown and shake my head in sorrow: “Ich spreche kein Deutsch.”

“I’m really not a bad person, I just don’t speak German,” I plead internally to the external masses.

Leaving the capital city, my travels to get to know my new country take me to the south, near Stuttgart. I settle in to my little town and find a job but I cannot survive in Germany, at least not for long, asking if people speak English, finger-pointing at goods desired and forever hoping that no one asks me a question. I had tried in the U.S. to enroll in German classes, but people don’t seem to be eager and anxious to tackle a difficult language that is not exactly pleasing to the ear, so the one course I had found was canceled. But now the time has come to learn German, through immersion, through submersion, sinking or swimming through three genders of articles, four grammatical cases and more possible plural endings and prepositions than anyone could ever want to digest; hopefully being victorious, coming out on top, becoming a communicator.

Like the millions who have immigrated to the U.S., I signed up for the equivalent of an ESL course: “IntensivKurs Deutsch, Grundstufe A1.” Back to the beginning, to infancy, to dependency, back to A-B-C and 1-2-3, only in German, simple counting seems to involve more than just arithmetic. 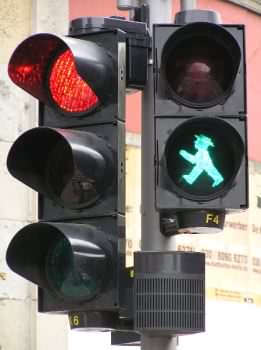 Normally, language learning is an exciting and rewarding undertaking for me, but finding myself already in Deutschland, having arrived in the country without previously acquiring the tools to survive and excel on German soil, I feel the pressure to learn, to know, to sprechen Deutsch. I walk into the first class session already feeling defeated. Why couldn’t I learn the language, secretly, silently, hidden among the natives, as it wafts through the air carrying meaning and messages from one German to another ?

“I’m sorry. I’m trying, but I still don’t speak Deutsch,” I appeal within to the German population without.

Anxieties held at bay, I take my seat in the class. A small feeling of comfort starts to take hold as I see I am not alone, surrounded by eleven other Anfänger, beginners, representing nine other countries. This is no ordinary language class. This is a full-blown global exchange with people from all over the world in the same position as I am, wanting, needing to learn, lernen die deutsche Sprache.

Camaraderie builds and learning is evident as this motley bunch bonds through classroom explanations given via a telephone chain of languages from one student to another to yet another. Don’t tell anyone, but we might be having fun here in our little oasis away from the rigors and demands of daily interactions with the German state. While possibly not intended to be so, the textbook, with its more “open and realistic” drawings, late ‘80s pictures and campy storylines, is hysterical and the classroom banter derived from them, comical. The stark white walls and dull gray flip-charts come alive with vocabulary lists and situational examples that only an international group of adults could devise.

We students come to class as perky and motivated as we can so early in the morning, ready, willing - and on occasion, able - to tackle another day, another topic, another tense in which to conjugate verbs. Little by little, the cacophony of noise becomes distinct and decipherable words, even if we don’t quite know what the words mean yet. Letters and phrases on a page start to string together into written patterns signifying something.

I giggle with glee when I understand a word on television or can peck my way through a flyer posted on the street. I dance around my apartment like a five-year old filled with the pure joy and excitement of just learning how to read and write her own name. My German roommates feed off my enthusiasm, taking up my German-language cause, helping me with my homework, sitting patiently as I struggle to piece together a coherent sentence auf Deutsch, and beaming with enthusiasm and pride in their own language as they guide me through its many, many, many peaks and valleys. “Dein Deutsch wird wirklich jedes Mal besser, ich bin immer wieder überrascht.” (“Your German gets better every time. I’m always surprised.”)

It’s been over a year now since Germany has become my home. I can’t debate the modern irony of Kafka auf Deutsch while sipping a beer at the Marktplatz with friends, but I did negotiate the price and purchase of an antique prayer book on behalf of a visiting friend. The salesman was patient, my friend impressed - and I was just happy to be understood during an actual exchange with a stranger. 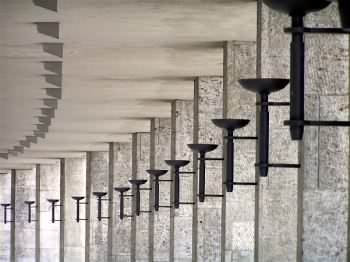 Jeden Tag, the polite questions from the ladies behind the counter of the Bäckerei become less frightening. “Sonst einen Wunsch?”

The people at the cheese store are less intimidating, and the local grocery store gradually becomes simply a place where food and household items are purchased and not the language landmine it had once seemed to be. Learning a language is a huge undertaking, and Deutsch, like my other more established but yet-to-fully-be-mastered languages, will take many more hours of dedication and practice. As with any challenge, I look forward to reaping the rewards, in this case, being able to freely move about the German countryside, able to lesen, schreiben, verstehen und sprechen the German language.

Remember, I’m not a bumbling fool. I just don’t speak German - well, not just yet.