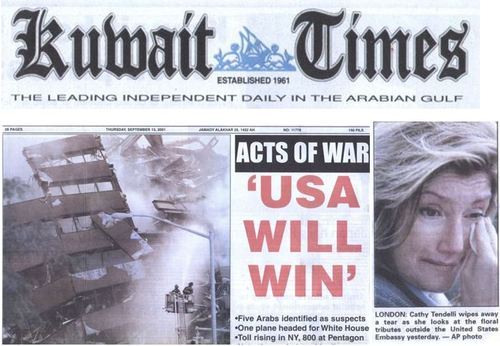 The year was 2001, and I had come to London one year earlier for two reasons. One was because I was offered a dream job working as the business development director for a global architectural firm designing five-star hotels in some of the most spectacular locations in the world – Tahiti, Seychelles, Dubai, Fiji, and the Maldives.

The other reason was to be closer to the love of my life, Fausto, whom I had met one year earlier at the Trevi Fountain in Rome.

I was living out my dream of an international, cosmopolitan life, commuting every other week to Rome. I had traveled extensively before moving to London and felt I was culturally open. I felt at ease with all of the people I worked with – whether Arabs, Australians, South Africans, Israelis, or Scots – and I thought of myself foremostly as a global citizen who just happened to have been born in the United States.

I cheerfully did my best to refute the stereotypes held by colleagues in my office, who maintained that Americans are provincial, overweight, and materialistic. Yet I had no idea that I would soon see a much darker side of international attitudes toward my country – and that a picture of me, to my great embarrassment, would become an international symbol of the pain and bewilderment of Americans overseas.

I woke up late on Tuesday, September 11, having arrived in London the night before after spending the weekend with Fausto in Rome. After lunch with one of our American architects, and while walking back to our office, my personal assistant, Debra, called to tell me that a terrible tragedy had happened in America: a plane had accidentally crashed into one of the Twin Towers in New York City.

Debra told me that they had switched on the TV in the conference room and that I should go in immediately and see the coverage. Walking into the room, I was stunned by the horrific images of the aftermath of the plane crash high up in the tower. Holding my breath while holding back tears for those who had died in the crash, I realized that it was the beginning of the workday in New York City. How many had perished while innocently sitting at their desks?

The room was bustling with managers, designers, architects, secretaries, all intent on carrying out the day’s activities: designing hotel rooms, sending out plans, chit-chatting about future projects, and setting up client meetings. Only a handful of us stood there, gathered around the television screen in shock at the billowing cloud of smoke emanating from the tower.

As we stood in disbelief, we heard the BBC newscaster say that a second plane had hit the second tower. Suddenly, the image of the second airplane smashing into the second tower was on my screen. It seemed like we were watching the world at war. I had a sick feeling in my stomach, but I grew even sicker looking around and seeing the others working away at their desks as though it were just another day. Had we become so totally immune to major catastrophes, even those unraveling right in our midst?

Seriously shaken, I decided to head back into my office to call my American girlfriend, Jan, who was also living in London. But before I could dial, my phone rang. It was one of our Palestinian clients for whom we were designing a palace. I was listening to her speak, without really hearing the words, when suddenly she asked me if I was American.

“Well, yes,” I replied, half-expecting her to say how awful she felt about what had happened this morning and how sorry she was for my country. But instead, she blurted out, “Well, you Americans had this coming! After all the countries you’ve destroyed, ruined and bombed, this is what you get – and you deserve it!”

As if this onslaught wasn’t enough, and within only an hour of the attacks, she pressed on. Smoke was still billowing out of the towers, and here she was, emphatically spewing the conspiracy theories that would forever shadow this tragic day. She told me that the attack on the Twin Towers was nothing but a plot by the Jews who wanted to get America mad enough to start a war in the Middle East: “You know, those planes were provided for and organized by the Israelis – even the pilots flying them were Israelis.”

Hearing all of these accusations (and from an important client, no less) left me clearly at a loss for words. I haltingly spat out the best response I could manage. I told her that while I agreed that my country undoubtedly had made mistakes, that was no excuse to treat all Americans alike. Then I told her I had to go, but that certainly someone would be contacting her shortly to follow up on the palace she wanted to have built.

As I hung up the phone, I struggled with the conflict inside me – the love of my country and the reality that I could not defend it. Were we guilty as charged? Did we commit such horrible acts that we deserved this? Were we hated so much that this was payback time?

With news of the Pentagon attack coming in, and now distraught so far from home or Fausto, I called my mom. She stated in no uncertain terms to lie low as an American overseas–anyone could be a target– and to not do anything or wear anything that might tip someone off that I was from the United States. No one at this point knew where the attacks had come from, nor where they would lead, and here in London, I was all alone.

Feeling terribly lonely and downright grief-stricken, I decided to ignore my mom’s advice and join with other Americans who were probably feeling much the same way. Foolishly, I headed over to the U.S Embassy, which happened to be located just a few blocks from my office. By this time it was evening in London. 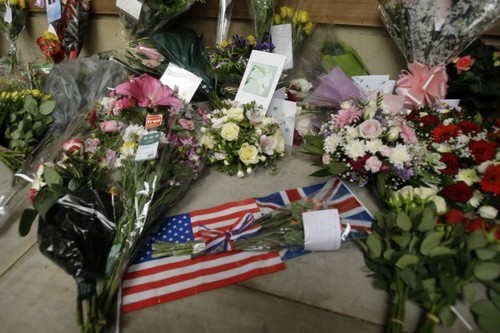 I arrived to find a circle of Americans holding hands, others cupping candles, and still others posting photos of loved ones lost in the tragedy. It was a beautiful, heartfelt sight, and joining them I felt somewhat at peace and soothingly connected in some way with my fellow countrymen. We broke into song: God Bless America and America the Beautiful. A USA Today photographer who had descended upon the scene snapped a photo of me weeping uncontrollably.

Regrettably, this photo ended up being the “picture worth a thousand words” for media outlets worldwide, trying to capture the zeitgeist of Americans abroad. The photo appeared in the London Times and theKuwait Times, on CNN, across internet sites, and even in all of my hometown newspapers. Friends and family members phoned from across the country, saying that they had seen a picture of me crying in front of the U.S. Embassy in London.

My mother, who had already been nervous about my living abroad, was now totally beside herself. She envisioned innocents taken down right in the streets. On my way into work on the tube a week after coming back from my holiday, someone had taped yellow posted notes inside the crowded train I was on. I read the following phrases on my ride that morning: Britain is America’s bitch, Blair is Bush’s puppet, Death to America, America is a terrorist country, It’s all about the oil, stupid.

September 11, 2001, was the day I realized that even though I felt I was culturally and politically savvy, in reality I was like the majority of my fellow Americans, blind to issues outside of our own backyard.

The ninth of eleven siblings, Catherine Tondelli was raised by a hard-working single mother. When she won a trip for two to Italy, she took her mother along and tossed three coins into Rome’s Trevi fountain, wishing for “love and the guarantee of a return to wonderful, romantic Italy.” Her wish came true, and she is now living in Rome with her Italian husband and globetrotting as a luxury hotel expert and event manager. She has written a well-received book, Three Coins in the Fountain, about her life and her international experiences; check it out here!