Skiing with the Serbs

We took the road towards Pale, into the heart of Bosnia’s Republika Serbska, twisting through mountains which had once been a favorite hideout for teams of the Yugoslav National Army artillery and snipers. Most of the mines had been cleared, but inclement weather would carry some down to the road every so often, blowing up pedestrians or cars.

We were three heady American women in our twenties, emboldened by the U.S.-led effort that ended the Balkan war after years of failed European negotiations, and had spent the last year working in destroyed villages, avoiding minefields, and helping rebuild a region destroyed by war. 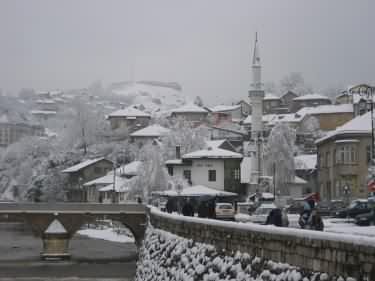 It had taken a toll on our It had taken a psyches. So one weekend, we set aside our usual security concerns as well as our ideals, and simply became three ski lovers, missing home and itching for a road trip. Even if it meant going over to the dark side: the Serb Republic, the part of the country carved out for the Serb ethnic group following Bosnia’s bloody civil war, the retreat of war criminals, the stronghold of NATO-hating former soldiers - and, incidentally, home to some of the best skiing in the former Yugoslavia.

Jarhorina, a former site of the 1984 winter Olympic ski competitions located just beyond the Serb Republic’s capital of Pale, had enticed us with its snow-covered peaks. Viewed from our poorly heated apartments in Sarajevo, it was too tempting to resist, even though by traveling there we would be supporting the very people who had imposed a four-year siege upon the city, shelling civilians on market day, and sniping at grandmothers as they ran through the streets in search of provisions.

“Say hi to my house for me,” bitterly joked a work colleague, whose family had been driven from Jarhorina in an “ethnic cleansing” campaign a few years back. Despite the peace, he hadn’t dared return.

The light snow had turned to blizzard conditions by the time we spotted the turnoff for our ski lodge in Jarhonina. We drove to the largest Swiss chalet-style building. The lobby was warm but dark, lit with a low-wattage fluorescent light. When our eyes adjusted, we noted the spartan décor of rough, handmade log furniture and a large wooden check-in counter.

The room was bereft of decoration other than white, hand-woven doilies covering the coffee tables, and a black-framed photo of a man with wavy, silver hair, prominently displayed on the whitewashed wall behind the counter. It was Radovan Karadzic, the notorious war criminal indicted by the International Criminal Court in The Hague and rumored to be hiding in the Serb Republic.

We did our best to hide our collective shock, but we must have given ourselves away, since the clerk smirked at us. He didn’t speak English, we didn’t speak Serbian, and it was clear from our reaction to his wall art that we wouldn’t have anything else in common except for our upcoming business transaction. After our exchange of Deutschmarks, he dutifully but reluctantly handed us our room key. “Dobar vecer” (good evening), we said in unison, to which he barely nodded.

We dropped off our bags and headed down to the communal area of the lodge to meet our travel partners. We were meeting a group of our fellow Sarajevo “Hash House Harriers,” an expat running and drinking group, whose leadership had organized the ski weekend. We ate hot stew for dinner, drank too many cold beers, and talked and laughed irreverently, as Hashers do, to avoid the obvious: the fact that we should have been ashamed to be where we were.

It snowed all night. We opened our window the next morning to find optimal ski conditions: fresh powder, robin-egg blue skies and crisp mountain air. But the lights in our room wouldn’t turn on, and when we went to down to breakfast, we found out there was a power outage. Our Karadzic-sympathizing ski lodge lacked a generator, so the ski lifts and tow ropes were out of order.

Laughing at the irony of our misfortune over breakfast with the members of the Hash, we ate boiled eggs and toast warmed over a gas stove. After two hours of waiting for the power to return, George, a Brit who represented Land Rover in Bosnia, said “Bugger this. Let’s take a drive.” Leslie, Heike and I, along with two Norwegian women who worked for the International Red Cross, piled into his Land Rover.

Not five minutes later, we were stuck in the snow on a road perpendicular to one of the slopes, tires spinning, digging us deeper into the snow and mud with each rotation.

“Do you have snow chains?” one of the Norwegian ladies asked hopefully.

“I think so,” George mumbled. “But I wouldn’t have a clue how to put them on.”

“No problem! We’re Norwegians! We know how to put on snow chains!” they cheerily proclaimed.

The Norwegians - big-boned, tall, long-haired blondes - worked away on the chains, chattering to each other in their language. The rest of us tried to help the car gain traction using nearby objects (tree branches, sticks, rocks). We got nowhere.

“Maybe we should go for help?” Leslie suggested.

“No! No! Don’t worry! We’re Norwegians! We were trained in winter survival skills before we came here! We will be finished soon!”

An hour passed. The sun moved behind the trees. Our toes began to go numb. The Norwegians were still fumbling away with the chains.

“This is ridiculous,” I said to my girlfriends. “Let’s go find some help.”

“We might not be here when you get back!” the Norwegian ladies yelled at us as we walked across the ski trail.

Earlier that day, we had seen workers from the lodge grooming the slopes on gargantuan, bright-red machines. Their makeshift parking lot was about 100 meters down the mountain from where we were stuck, next to a small wooden shack with smoke emanating from a narrow metal chimney.

We arrived at the shack and knocked on the wooden door. There was no response. We opened the creaky door to a small, dimly lit cabin, waving our hands in front of our faces to clear the air of dense smoke from cigarettes and burning wood.

Four men wearing blue jumpsuits and fur-necked parkas sat with hunched shoulders at a small wooden table at the far end of the low cabin, their knees practically touching their chins. Smoking silently and drinking thick, black, Turkish coffee, they barely glanced in our direction.

“Dobar dan,” the men grumbled back in unison, as half-heartedly as new prisoners greeting the warden.

Heike continued. “Imamo problem. Velik problem.” (We have a problem. A big problem.)

The talker was easily 6'5". Unshaven and with stringy black hair, he had dull grey skin and dark circles under his eyes, which were set far back into their sockets.

“I’ll pull the car out of the snow for you,” he offered in rasping Serbo-Croatian. “How much will you pay?”

He snickered to his companions and walked past us out the door, saying without turning around, “Let’s go.”

He climbed onto the closest trail-grooming machine, hit the ignition and signaled for us to scale the beast and sit next to him for the ride back up the mountain. The monster jerked forward. Hanging on white-knuckled to the black leather seat, we sped up the 60-degree slope, conscious of the spectacle we presented - three young women riding up the mountain with a potential war criminal, on what could easily be an instrument of death.

Our newly-purchased friend backed up the machine in front of the Land Rover, cut the engine, jumped down and put the winch to work.

We hopped off the heights of the red monster just a bit triumphantly. George, clearly feeling somewhat emasculated, joked sardonically, “The cavalry has arrived.”

The Norwegians looked deflated, but I couldn’t resist a dig.

“We’re Americans,” I quipped mockingly, as the Land Rover was pulled out of its slippery hole. “We finish the job - by any means necessary.”

Amanda Fernández is an economic development consultant and freelance writer with degrees in Spanish, International Development and Latin American Studies. She has lived and worked in the United States, Latin America, the Middle East, Eastern Europe, Africa, and is now located in Buenos Aires, Argentina. See more of her work here:
http://ghanastories.blogspot.com
http://argentinastories.blogspot.com