The Bookseller of Dhaka

Rain swept across the patio, flowing almost parallel to the ground. Coconut palms on the perimeter bent severely, whipped in the heavy winds. The South Asian nation of Bangladesh was leaving the season of grisma and entering barsa, the monsoon season. Grisma is a difficult season, between the dry coolness of December to February and the heat and flooding monsoon rains starting in June. In grisma, Bangladesh suffers from worsening drought conditions - ironic in a nation with the world’s largest river delta and a reputation for massive floods. Rivers and streams dry up and become navigational nightmares.

The arrival of the monsoons is welcome, drawing cooler air, heavy rains and strong winds off the Bay of Bengal. Bangladesh is quickly transformed back into a land of water, with some of the largest river systems in the world overflowing their banks, driving millions of people from their homes. Raindrops fall heavily, splashing the dry dust coating the leaves of trees. The monsoon wind bends the palms and fruit trees outside our window, and bamboo sways in turbulent patterns. The darkness of the heavy rain clouds makes the sun a distant memory, as the rains continue for days on end. We came to Dhaka for my two-year stint as Peace Corps Country Director. Sarah, my wife, carried her university teaching load with her, as well as her profession as artist and poet. Reluctantly, our nine-year-old son Will joined this temporary relocation to explore this often overlooked and stereotyped nation of 144 million people. 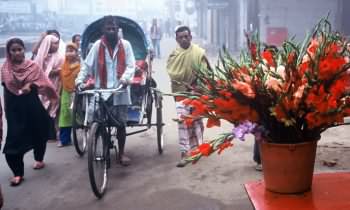 We were sitting down to dinner amidst the pounding of rain outside, when the gate bell rang. Bells rarely ring at night in Dhaka, but when they do, they often portend some unexpectedly delightful event. Our house guard knocked on our door and breathlessly announced that “Mr. Nasam” was here to meet with us. I had heard of this strange man from others who had lived in Dhaka. They reported that Mr. Nasam, an enthusiastic seller of books whose clients were expatriates living on the outskirts of Dhaka, would arrive at your door without notice, often at the most inopportune time. He presented himself with such a sweet firm demeanor that one could not easily turn him away. He had no telephone; he simply arrived without notice with his collection of books.

Curious, my wife Sarah went out to the gate and found a small graying man flashing a warm smile, sitting on top of boxes on the seat of a rickshaw. Mr. Nasam, dripping wet, greeted her in fluent English, proudly announcing that our friends Dee and Victoria had directed him to us and he had come to show us his book collection. His bicycle rickshaw was pedaled by another thin elderly man, one of the tens of thousands of poor rural men who carry people and goods around the city for ten hours or more each day. The rickshaw carriage was covered with fantasy paintings of tigers, rivers, and Indian movie poster scenes, and the passenger seat was piled up over three feet high with boxes of books. The driver, orwallah, was wrapped in an old shawl to keep the rain off his face and wore only a long plaidlongi cloth around his hips.

After climbing down and removing his shoes at our door, Mr. Nasam slowly and formally introduced himself and asked if we wished to peruse his collection of books. We eagerly accepted, as books have never had difficulties entering our lives but continue to have a major problem with leaving. The rickshaw wallah followed Mr. Nasam into our living room with box after box carefully wrapped in plastic, placing them on the floor of our living room. Inside each box were hardbound books, lovingly wrapped individually in more plastic: books about various topics and especially on South Asian politics, art and economics.

We sat expectantly as he slowly unwrapped each book as if it were a long-lost treasure, passing each carefully as a jewel for us to look at. The volumes on Indian architecture were especially fascinating, and we gazed lovingly over one rich [and costly] book about applying this unique and intriguing South Asian style to the design of work and living spaces. With time in Dhaka to reflect and dream, such books feed our free-floating fantasies.

Using restraint, I purchased only one book and Sarah emerged empty-handed, but Mr. Nasam knew he had hooked a new captive audience. I asked for South Asian cookbooks on his next visit as well as volumes on South Asian politics. Sarah requested books on Hindu art and architecture. Next time, he promised. After almost two hours, our dinner now cold, Mr. Nasam and the rickshaw wallah disappeared into the dark, rainy night. Living up to his reputation, he would return again and again on the rickshaw, unannounced, to present new offerings.

Mr. Nasam’s importance to our lives can be gauged by noting that Bangladesh overall has an abysmally low literacy rate. The major Bangladeshi non-governmental organization, BRAC, recently reported a literacy rate of 47.6% for men and 35.6% for women. However, most understand this rate is much lower, and state it at hovering around 20% literacy overall. There are 6 newspapers per 1,000 citizens, as compared to 218 per 1,000 citizens in the United States. Few bookstores exist outside of universities, and there are almost no books in English. Bangladesh was founded on the fierce bloody struggle for its local language, Bangla, and as a result, English language studies were eliminated in schools. 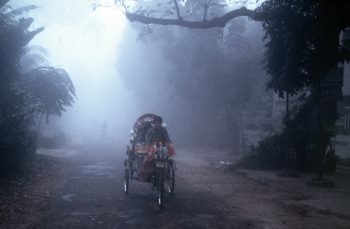 Added to this was the fact that it was very difficult for us to order English-language books from abroad. Connecting to the Internet in Dhaka required an average of ten dial-up attempts, using a list of seven access numbers that were inevitably busy. Connections were unexpectedly cut off, making leisurely searches for books virtually impossible. If we able to finally order a book online, the package would arrive via diplomatic pouch many weeks later. After September 11 and the anthrax scares affecting U.S. Embassies around the world, our mail was delayed for three months or even more, and the packages were irradiated in transit: when books finally arrived via the Embassy pouch, the pages had been fried to a crisp brown.

Mr. Nasam returned to our home many times over the following two years. We bought many, many books from this small, sparkling man. Lingering over tea, we learned of his personal history and the 1970 War of Liberation that brought Bangladesh into being, and heard his stories of bringing shipments overland from Calcutta in India. He later brought us gifts - a watermelon, mangoes when in season, and star fruit. Yet the most important gift he gave us was a connection between buyer and seller, between Bangladeshis and Americans, that transcended the troubling political events around us.

Our memories of Mr. Nasam remained long after our return to the United States, surfacing whenever we reflected on the strange, special, and beautiful experience of living in a remote South Asian country. Bangladesh is a place where a quiet bookseller could arrive unannounced at our gate, amidst a torrential monsoon downpour on an overloaded rickshaw.

We came to see the bound pages he carried as sacred items, brought by a frail man to offer us the wisdom and pleasures inside. Our view of books themselves changed dramatically: instead of a readily available commodity in bookstores on every corner in North America, they became much-beloved objects of worship carried by an enthusiastic messenger. During every one of his visits, we felt connected to Mr. Nasam by a deep love and respect for books that crossed borders.

© 2006 by Michael Bedford. All rights reserved.

Since 1970, when Michael began as a Peace Corps volunteer in the Philippines, he never has quite gotten Asia from under his skin. For the past 37 years, he has lived and worked in numerous countries of the Asia-Pacific region, working in non-governmental organizations and the Peace Corps on humanitarian assistance programs. Additionally, he has published widely on issues of development, U.S. policies in Asia, and human rights. Michael is married to the artist Sarah Sutro and together, they have a son, Will. They were in Dhaka from 2000 to 2002.